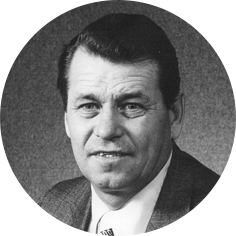 Jack Markewich, aged 89 years of Moose Jaw, SK passed away on Wednesday, July 24th, 2019.  Jack was born on February 24th, 1930 to George and Dora Markewich in their home on Maple Street in Moose Jaw.  Jack attended Empire School, Central Collegiate and Peacock High School. He worked at CHAB for a short time, in the office at Robin Hood Flour Mills, in an administrative position for CFB Moose Jaw, as well as working in the Officer’s Mess as a bartender, before working for Prudential Life Insurance for 25 years.  Jack also worked on his father’s farm in Ardill, SK. Jack enjoyed playing hockey for Moose Jaw hockey teams and playing for the Canucks. He also played ball for Moose Jaw teams as a catcher. Jack married Winnie in 1953 and together they raised 5 children. They had 66 years together, living all of their lives in Moose Jaw.  Jack really enjoyed a good discussion and talking with people. He was a loving, kind man and loved his family. He was predeceased by his parents, George and Dora; and brothers, William (Bill) and 2-month old Mike. Jack will be lovingly remembered by his wife, Winnie; children: Darlene (Jeff) Young, Kandice (Brad) Hennenfent, Randy (Andrea) Markewich, Roderick (Barb) Markewich, and Jeff (Jennifer) Markewich; 10 grandchildren and 6 great-grandchildren whom he cherished; as well as his sister, Pat (Tom) Olson and their children.  A Celebration of Jack’s Life will be held on Saturday, August 3rd, 2019 at 1:00 p.m. in the Harvey Room at Moose Jaw Funeral Home.  As an expression of sympathy, donations in Jack’s name may be made to KidSport, 1870 Lorne St, Regina, SK S4P 2L7.  Arrangements are entrusted to Moose Jaw Funeral Home, 268 Mulberry Lane. Michelle Surtees, Funeral Director 306-693-4550.