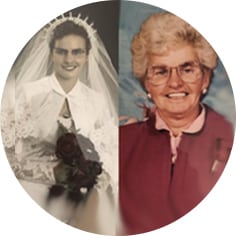 The family of Doreen MacLachlan, née Francis, announces her peaceful passing, with family by her side on 21 April 2020.  Doreen was the youngest daughter of six children, to the late William and Mabel Francis; born 29 December 1934.  Raised on the Francis farm north of Moose Jaw, Saskatchewan along with siblings Jean, Betty, Gordon, Shirley, Harold and Donald.  Doreen and Clare MacLachlan were married on 25 June 1960 and their two sons Perry and Keith soon followed.  The new family settles on the MacLachlan farm south of Eyebrow, Saskatchewan.  After the untimely loss of Clare on 10 May 1985, Doreen courageously carries on the family farm with the MacLachlan family.  Welcoming Perry and Maxine’s daughters, Jamie and Meagan; Doreen was enthralled as a grandmother.  When tragedy struck with the unfortunate loss of Perry, Doreen once again headed the farm and was a strong presence for her grieving family.  Continuing her and Clare’s love of Arabian horses, passing down her wealth of knowledge to her granddaughters, participating in horse shows and trail rides with her Miniature Horses was a passion.  In her aging, Doreen moved from the farm to Waldeck, Saskatchewan with her son Keith.  To be closer to granddaughter Jamie and her great-grandchildren Daynan and Elayna; where she soon found her place again as an adoring grandmother.  Soon Meagan and Scott welcomed their two boys, Ethan and Ryan who travelled from Dilke, Saskatchewan often to visit.  Meagan, Jamie and Keith were supportive by Doreen’s side when she needed them the most, transitioning her life into the care of the Providence Place in Moose Jaw after her scare of a stroke.  Doreen was very appreciative to the nursing staff who with dignity made her comfortable for her last few months.  The immediate family will attend her burial in the Eyebrow cemetery alongside Clare and will be hosting a memorial celebration of Doreen’s life at a later date to be announced.  Doreen will be affectionately missed by her surviving brothers Harold and Donald; countless cousins, nieces, nephews and many friends. Arrangements are entrusted to Moose Jaw Funeral Home, 268 Mulberry Lane.  James Murdock, Funeral Director 306-693-4550.