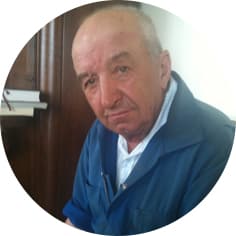 Steve Mackow of the Aquadell District, passed away peacefully on April 11, 2019 at Regina General Hospital after a brief illness.  Steve was born on August 8, 1935 near Chaplin, SK. Steve was the middle child of five siblings born to John and Eva Mackow.  He attended the Rolling Prairie School but due to circumstances, began farming at an early age. Steve was a very private man, but those who knew him well remember his love for animals, farming and talking politics.  Steve married Janet Coutts on May 1, 1976 and had three children. In his later years, Steve enjoyed visiting family, attending auction sales and patrolling the fence line on his beloved John Deere Gator. He was an active member of Saints Peter and Paul Ukrainian Catholic Church near Chaplin, SK.  Steve is predeceased by his father, John, in 1945; his mother, Eva, in 1987; his sister Mary in 1994, and his brother Donnie in 2004. He is survived by his devoted wife Janet, his children: Heather (Gordon) Miller of Calgary, AB, Judy (Jeremy) Juengel of Cheyenne, Wyoming and Linda Mackow of Calgary, AB, grandchildren: Kurt, Aaliyah and Colton Miller and Caleb Juengel, siblings: Fred Mackow of Moose Jaw, SK and Diane Okraincee of Glentworth, SK as well as many nieces and nephews. The Funeral Service will be held on Monday, April 15, 2019 at 1:00 p.m. in the Ukrainian Catholic Church of Assumption of Blessed Virgin Mary, 625 5th Ave. S.W. Moose Jaw, SK.  Father Vasyl Tymishak will officiate.  The interment will immediately take place at the Chaplin Cemetery. As an expression of sympathy, donations in Steve’s name may be made to the Central Butte and District Volunteer Fire Department, Box 222, Central Butte SK, S0H 0T0. Arrangements are entrusted to Moose Jaw Funeral Home, 268 Mulberry Lane.  Calvin Gammel, Funeral Director 306-693-4550.