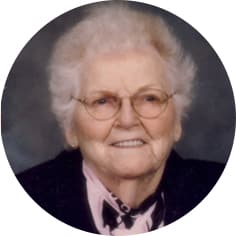 On January 14th 2008 Phyllis Ludke went to be with her Lord whom she served and loved.  She resided at Providence Place.  She was 86 years of age.  Predeceased by her son, Bob (2004) and husband Carl (2006), her mother Maggie, sister Helen Mitchell and brother Bob Clark.  Left to mourn her passing are her two daughters Peggy (Winston) Watts of Red Deer and Carol (Marv) Dyck, and daughter-in-law Carol of Moose Jaw.  Also left to mourn are her grandchildren: Terry (Diane), Scott (Bonnie), Corrie (Gary), Patti (Frank), Bob (Beckie), Janet (Sean), Jason (Bridgette); great-grandchildren: David (Whitney), Josh, Olivia, Jillian, Courtney, Taylor, Jayden, Kathlyn, Kassandra, Marissa, Karina, Linnea and Sophie.  She is also survived by many nieces, nephews and her special sister-in-law Isabelle.  Her family was always very important to her.  Over the years she was involved in many activities that her children took part in.  This included coaching softball, leading a Junior Choir and working at Strasbourg Bible Camp.  She loved doing many kinds of crafts.  She was well known also because of the time that she spent working at Eaton’s, Walkaway Shoe Store and Sterling Shoes.  Her door was always open to anyone who needed a listening ear or a helping hand.  There was never a Christmas that went by that she did not include people who had no family and would otherwise be alone.  The Memorial Service will be held on Saturday, January 19th, 2008 at 2:00 p.m. in the Moose Jaw Alliance Church.  Rev. Bruce Ellerogdt will officiate.  Private Family burial will take place at Sunset Cemetery.  Tributes may be made payable to Christian and Missionary Alliance Global Advanced Fund c/o the Moose Jaw Alliance Church or the Canadian Cancer Society, 61B Ross St. West. Moose Jaw, SK. S6H 2M2.