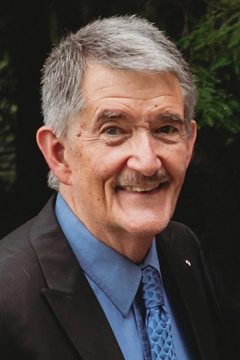 After serving the Lord faithfully for 72 years, Raymond “Randy” Harvey Loper peacefully went to be with his Lord and Savior on Thursday, September 8th, 2022 after courageously fighting a battle with cancer with God’s strength.  Randy was born to Raymond H and Mary H Loper of Greenville, South Carolina and was actively involved with Boy Scouts of America during his childhood.  He accepted the Lord at age 16 and felt called to serve the Lord overseas in his grade 12 year.  He began his higher education at Furman University in Greenville where he acquired his Bachelor of Science in Biology and Chemistry, and continued his studies at the Medical University of South Carolina in Charleston where he graduated with his M.D. in Medicine.  Randy continued biblical studies at the Evangelical Institute of Greenville, and later joined The Evangelical Alliance Mission (TEAM).  Randy served faithfully with TEAM in Nepal as a medical doctor missionary for 24 years.  After the Lord brought Beth into his life in Nepal, they were married and both returned to serve at the hospital in Nepal together.  After their son Jonathan was born, they remained in Nepal for 11 more years before moving to Caronport, SK to take care of Beth’s mother.  While living in Canada, Randy worked in the Caronport Medical Clinic and as a Surgical Assistant in Moose Jaw.  He was actively involved with the ShareWord Global (Gideon’s) Ministry, the Church in Caronport, Promise Keepers, Turtle Mountain Bible Camp, and many Briercrest events.  Randy was a loving husband, father, powerful prayer warrior, welcoming presence, and bright light for his Lord Jesus Christ.  He was predeceased by both parents; and brother, Richard Loper.  Randy is survived and deeply missed by his wife, Beth (Pomeroy) Loper of Caronport, SK; son, Jonathan (Nancy) Loper of Caronport; sister, Laura (Bruce) Harris of Greenville, SC; brother, Ralph (Ruth) Loper of Tuscon, AZ; sister-in-law, Tami Loper of Evans, GA; eight nieces and nephews; and numerous cousins.  The Memorial Service will be held on Saturday, September 24th, 2022 at 2:00 p.m. in Edward’s Chapel, 510 College Drive, Caronport, SK.  Interment will take place at Caronport Cemetery.  Those not able to attend may view the service virtually by going to www.caronport.church/video.  A Time of Visitation for Family and Friends will be held on Friday, September 23rd, 2022 from 7:00 – 8:30 p.m. in Moose Jaw Funeral Home.  As an expression of sympathy and in lieu of flowers, donations in Randy’s name may be made to ShareWord Global (Gideons), PO Box 3619, Guelph, ON N1H 7A2, TEAM (The Evangelical Alliance Mission), PO 969, Wheaton, IL 60187-0969, USA, Briercrest College and Seminary, 510 College Drive, Caronport, SK S0H 0S0, Evangelical Institute, 700 N Parker Rd, Greenville, SC 29609, USA, or Turtle Mountain Bible Camp (One Hope Canada), PO Box 1198, Boissevain, MB R0K 0E0.  Arrangements are entrusted to Moose Jaw Funeral Home, 268 Mulberry Lane.  Gary McDowell, Funeral Director 306-693-4550