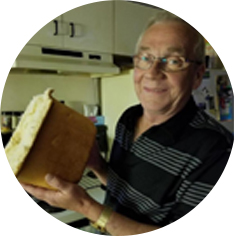 Kenneth John Loftus, aged 62 years of Moose Jaw, SK passed away on Thursday, September 13th, 2018 – but not until he gave it a hell of a fight, a fight to the end.  Born to Gerald and Aili (Violet) Loftus (both deceased), Ken is survived by his twin brother, Kelly; brothers, Jerry (Brenda) and Pat; sister, Karen Mortenson; niece, Maxine Loftus; and nephews, Kurt and Nolan Mortenson.  Ken worked at Klein’s Paint, General Paint, and the Saskatchewan Liquor Store. He enjoyed working with both staff and customers, and he formed good friends everywhere he went. Although he had no family of his own, he said his family was of lifelong friends Rob and family, Larry and family, Bill, Dan, and so many more.  All animals large and small, whether bird, horse or dog, were all a part of his world, especially a couple of little dogs, Murphy and Max, which he had a special place in his heart for. It is said that the true worth of a man is in his friends. Ken was indeed a very wealthy man and will be dearly missed. A Wake Service will be held on Wednesday, September 19th, 2018 from 2:00 p.m. to 4:00 p.m. at the Eagles Club, 561 Home St W, Moose Jaw, SK.  A private family interment will take place at Rosedale Cemetery.  Flowers are gratefully declined. As an expression of sympathy, donations in Ken’s name may be made to the Canadian Cancer Society, 1910 McIntyre St, Regina, SK S4P 2R3 or The Moose Jaw Humane Society, Box 1658 Station Main, Moose Jaw, SK S6H 7K7.  Arrangements are entrusted to Moose Jaw Funeral Home, 268 Mulberry Lane. James Murdock, Funeral Director 306-693-4550.