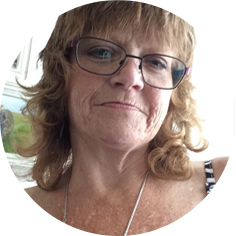 With great sadness we announce the passing of Susan Reta Lockwood, aged 49 years of Moose Jaw, SK on Thursday, November 26th, 2020.  She was predeceased by her step-father, Ed Moodie.  Susan leaves to mourn: her life partner of 14 years, William Suwala; step-sons, Nat (Brynn) and Kyle (Vanessa); mother and step-dad, Eleanor Moodie and Earl Holmes; father and step-mom, John and Elva Lockwood.  She will be cherished always by her sisters and brothers-in-law, Deborah (Dick) Rhodes and Kathleen (Mike) Hicks; niece, Cassidy Rhodes; nephew, Beau Hicks; her sweet kitty, Pepper; as well as her extended Suwala family, and many aunts, uncles and cousins.

Susan was born in Davidson, SK on December 31st, 1970.  In 1977, the family moved to Duncan, BC on Vancouver Island.  Susan graduated from Cowichan Senior Secondary School in 1988.  She worked at a video rental store which began her interest in movies and movie trivia, as well began her life-long love of collecting movies.  As an adult Susan lived in her favourite city, Victoria, BC, for a short time before moving to Moose Jaw where she met her loving life partner Willy.  To Willy, Susan was the love of his life and she was affectionately known as “his princess”.  He lovingly cared for Susan, with great devotion, through many struggles and a long battle with Crohn’s disease.

Susan was fiercely loyal to her family.  She had a sharp wit and was never judging of others.  She was an avid supporter and new volunteer for SCRAPS (Stray Cat Rescue and Protection Society).  In the last year of her life, Susan became a part of the City Oasis Foursquare Church family.  Susan proudly accepted Jesus Christ as her Lord and Saviour.  He has taken her home in His loving arms.

Due to the Covid-19 health situation, a Service to Honour Susan will be held at a later date.  Arrangements are entrusted to Moose Jaw Funeral Home, 268 Mulberry Lane.  James Murdock, Funeral Director 306-693-4550