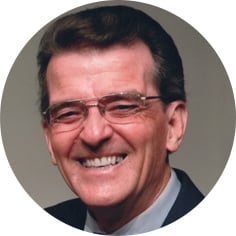 It is with heavy hearts we announce the passing of Andrew Lindsay at the age of 79 years, at Extendicare in Moose Jaw, SK on Tuesday, June 11th, 2019.  Andrew was born in Edinburgh, Scotland into a family of nine children, as the oldest son next to his three sisters.  Andrew is the son of Mary Campbell and Andrew Lindsay Sr. (both deceased); brother to: Annie and Douglas Wood (deceased), Mary and Stewart Wilson (deceased), Rosina (deceased) and Harry Lemasurier, David and Burtha Lindsay, Donald and Linda Lindsay (deceased), Robert and Karen Lindsay; and uncle to numerous nieces and nephews.  Andrew and his family migrated to Canada from 1957 – 1961. He married his wife of 58 years, Joyce Rowe in 1961 in a small country church in Stanwood, Ontario. Afterwards, Andrew received a degree for the Fellowship of Canadian Banking Association and then graduated from Queens University with a Certified Management Accountant degree.  Andrew and Joyce moved to Australia with their two children, Andrea and Mark Lindsay, and they lived in numerous places there. In 1986 Andrew and Joyce wanted to do more for people somewhere in the world and they decided to help whomever they could in Africa. They first took a job with World Relief Canada/Emmanuel International where they ran a refugee camp for Ethiopians fleeing hunger, and planted trees in the desert north of Khartoum,  Andrew and Joyce went with Leprosy Mission International and the German Leprosy Mission from 1988 – 1992. By the time they came back to Canada in 1993, Andrew had already learned 6 more languages including German, Japanese, and a few Middle Eastern languages. Andrew spent the rest of his life being there for his children and 5 grandchildren: twin boys, Jamie and Aaron Townsend, Kayli Reimer, Connor and Lauren Lindsay. Andrew retired 5 years ago and from his life stories, we know he loved travelling with his family.  Andrew was a great man with a great sense of humour and the great Lindsay glare that could put anyone in their place. The family will miss Andrew, the man who was one of the biggest role models to them all. The family wishes to thank the Extendicare Moose Jaw staff for their love and help, as well as his friends and neighbors at Crestview Manor for their love, support, and friendship throughout the years. A Celebration of Andrew’s Life will be held on Saturday, June 15th, 2019 at 11:00 a.m. in St. Marks Presbyterian Church, 80 High St E, Moose Jaw, SK.  Arrangements are entrusted to Moose Jaw Funeral Home, 268 Mulberry Lane.  Gary McDowell, Funeral Director 306-693-4550.