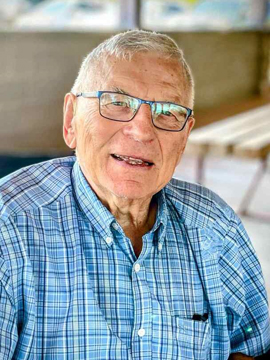 Les Leskewich aged 90 years of Caronport, SK, went to be with Jesus on Sunday, November 20th, 2022, after a courageous battle with cancer.

Les was born on July 15th, 1932.  He was the fourth of six children born of Daniel and Ksenja Leskwich who immigrated from Russia, before Les was born, to settle and farm in the Alpine District of Manitoba.  Les was predeceased by his brother, Steve (Mary) and sister, Jean (Nick) Ness; and is survived by siblings: Walter (Mary), Phil (Marcia), and Myna (Sam) Kublick.

Les married his high school sweetheart, Peggy Staples in their hometown of Benito, Manitoba on April 30th, 1955.  Peg and Les made their home in Caronport, where Les began his teaching career and later served as the Alumni and Public Relations director for Briercrest College.  In 1959 they welcomed their daughter Marlie Beth into their family and two years later, their son Grant.

A move to Saskatoon, SK in 1979 launched them both into a successful career in real estate.  During their years in Saskatoon the family expanded as Marlie married Blaine and Grant married Amber.  Les was overjoyed when his three grandchildren, and years later their spouses: Michael (Chelsea), Mark (Stephanie) and Jessica (Nathan) would join the family as well.

Les’ retirement brought the couple to Moose Jaw, SK.  One of the first projects Gramps’ took on was setting up a playground in their backyard so they could host the great-grandchildren: Jordynn, Levi and Kynleigh McLeod; Elliott, Evander, Owen and Orson McLeod; Eleanor, Piper, and Ezra Yaworski.  A recent move brought them back to Caronport where they would make their home across the hall from lifetime friends Bruce and Marion McLeod.

Les was gentle and generous.  Whether it was serving coffee at the farm, going on a parts run, or dropping off snacks in the field, Les loved to serve.  He was quick to lend a helping hand and could often be found happily working on a special project for someone in his shop.  He cared deeply for his family, checking in daily and praying for each one by name.  Les always had a story to tell.  He loved life and will be remembered for his warm hugs, his sense of humor, and the way he filled a room with joy.

His steadfast faith and love for Jesus gave Les the strength he needed to stay the course and finish well.