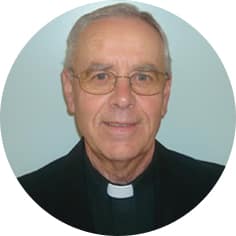 Reverend Father Yurij Lazurko of Moose Jaw, SK passed away peacefully on October 9, 2019. Father Yurij was born on March 9, 1947 in Balingen, Germany to parents Klym and Iryna (Danylak) Lazurko. The family emigrated to Canada in 1948, settling in Canora, SK. Following completion of high school Father Yurij attended the University of Saskatchewan graduating in 1969 with a Bachelor of Arts degree and a Diploma in Education. He taught school in Buchanan for one year and four years at St. Joseph’s College in Yorkton. He left teaching for one year to complete his Bachelor of Education degree in 1975. That year he married Dorothy Bomok in Saskatoon. They moved to Moose Jaw where he spent the next twenty nine years teaching physics and chemistry at the Saskatchewan Technical Institute (STI), later known as SIAST. Life became busy raising a family and being involved in church, school, and community. In 1990 he was ordained a Deacon in the Ukrainian Catholic Church. In 2004 upon retirement from teaching, Father Yurij entered Holy Spirit Ukrainian Catholic Seminary in Ottawa, attending St. Paul’s University. In 2005 he was ordained to the Priesthood by Bishop Michael Wiwchar, CSsR. He was honoured to serve the parishes of Moose Jaw and District (Chaplin, Glentworth, Hodgeville and Swift Current) for the next twelve years, retiring in 2017 due to failing health. Father Yurij was a musician and a vocalist. He played the violin, and directed church and community Ukrainian choirs. His passion was Ukrainian liturgical music. He played bridge, was a basketball referee, and loved fishing, especially the trips to Northern Saskatchewan for “the big catch”. He was extremely proud of his children and always made time for them. The brightest stars in his world were his nine grandchildren. He cherished every event, visit and opportunity he had to spend with them. He knew they loved him. He was the best Dido ever! Father Yurij is predeceased by his parents. He will be forever loved by his wife, Dorothy; his sons Gregory, Mark (Kathleen) and daughter Christina (Mathew) Pulickal; his grandchildren: Matthew, Kara, Adam, Andrew and Gemma Lazurko, Maximus, Benjamin, Gabrielle and Samara Pulickal. Father also leaves to mourn his sister, Oksana (James) McIntyre; brothers, Markian (Halyna) Lazurko, Andrij (Carla) Lazurko, and their children and grandchildren; Dorothy’s siblings and their families and many wonderful cousins and special Godchildren. Funeral Prayers will be held on Thursday, October 17, 2019 at 7:30 p.m. at the Ukrainian Catholic Church of the Assumption of the Blessed Virgin Mary, 625 – 5th Ave. SW, Moose Jaw, SK. Funeral Liturgy will be held on Friday, October 18, 2019 at 11:00 a.m. at Church of Our Lady, 566 Vaughan St. Moose Jaw, SK. Interment to follow at Rosedale Cemetery. Celebrant Most Reverend Bishop Bryan Bayda, CSsR, concelebrants clergy of the Eparchy of Saskatoon. The family thank the staff at Providence Place for their kindness and care of Father Yurij during the past ten months. Thank you to Deacon Lamont Dyck for his spiritual companionship to Father Yurij. Donations in Father Yurij’s name may be made to The Ukrainian Sisters of St. Joseph Ukraine Orphans Fund, 33 Valens Drive, Saskatoon, SK S7L 3S2 would be greatly appreciated.  Arrangements are entrusted to Moose Jaw Funeral Home, 268 Mulberry Lane. James Murdock, Funeral Director 306-693-4550.