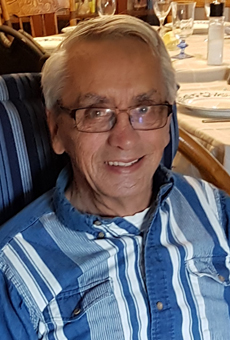 Alfred “Alfie” Treffle Lafleche, aged 75 years of Moose Jaw, SK passed away on Sunday, November 7th, 2021.  Alfie is survived by his wife of 12 years, Lucie; brother, David; sister, Alice; sons, Grant and Jedd; and grandson, Nate.  Alfie enjoyed life to the fullest.  His career as a commercial insulator took him many places.  Calgary was his home for many years.  After his retirement in 2012, Alfie and Lucie moved to Central Butte, SK.  In 2014 he was diagnosed with a form of Alzheimer’s and in 2016 they moved to Moose Jaw.  Alfie resided at Extendicare in Moose Jaw from 2019 until his passing.  Alfie enjoyed hockey and football – playing, coaching and watching.  His sense of humor was amazing.  He was kind and thoughtful, but did have a temper that came out once in a while.  He loved with all his heart, and was deeply loved and will always be in our hearts.