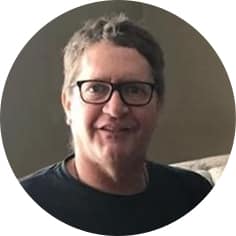 Walter “Wally” Robert Kupper, aged 57 years of Briercrest, SK passed away peacefully in his home on Friday, January 31st, 2020.  Wally was born on May 9th, 1962 in Assiniboia, SK.  After numerous placements within the Foster Care system, he was united with Iris, Jake and Ron Folk of Moose Jaw, SK in 1968.  This would become his forever family and home. Wally attended St. Michael Elementary School and later Vanier Collegiate. Wally worked in numerous janitorial positions and later found the job where he was most satisfied, rural delivery of the Moose Jaw Times Herald newspaper.  As he would describe it “rolling across the heartland”. Wally developed many friendships with his customers, as was evident by the numerous Christmas cards and gifts he received every year. Wally always said “If you love what you do in work, you never had to work a day in your life”.  He thoroughly enjoyed life and visiting with people. He could brighten anyone’s day with his crazy jokes and infectious laugh. Wally truly had a big heart and would help anyone in any way he could. Wally had a very strong faith in God, as was evident in his daily devotions. He would often call people and offer a prayer when travelling, sick, celebrating a meal, or simply when he thought they need a prayer.  In Wally’s later years he moved to Briercrest, SK. There, he developed many friendships which he cherished. No matter what Wally had in his life, whether lots or little, he was always happy. He was predeceased by his mother and father, Iris and Jacob Folk. Wally is survived by his brother, Ron (Carolyn) Folk; nieces, Maegan Folk (Mat) and Caitlin Folk (Adam); and Aaron Folk. A Celebration of Wally’s Life will be held on Saturday, February 8th, 2020 at 1:00 p.m. in Moose Jaw Funeral Home.  Reverend Barry Holtslander will officiate and interment will take place at Briercrest Cemetery at a later date.  In lieu of flowers, donations in Wally’s name may be made to a charity of one’s choice. Arrangements are entrusted to Moose Jaw Funeral Home, 268 Mulberry Lane.  James Murdock, Funeral Director 306-693-4550.