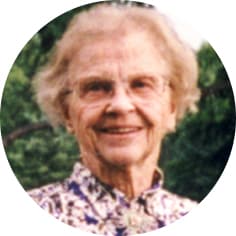 Pearlie Krislock, of Riverhurst, Saskatchewan, passed away peacefully on Saturday, July 5th, 2008 at the Regency Manor in Central Butte. The Funeral Service will be held on Wednesday, July 9th, 2008 at 2:00 p.m. in the Riverhurst Community Hall. Pastor Wendy Gibson will officiate. Pearlie was born in the Maple Creek area on September 6th, 1918 to Samson and Jensine Jacobsen. After her mother’s passing in 1922, Pearlie lived with the Abrahamson family, eventually moving with her father to Minneapolis and later Chicago. Samson’s early death in 1928 sent her back to Saskatchewan and the Abrahamson family on June 30th, 1929. She met Gil Krislock while working in the Hazlet area and they married on June 30, 1942. Gil, Pearlie and son Bruce moved to Riverhurst in August 1943. The family expanded with the addition of Brian, Keith, Dwight, Lynette and Coralee. Pearlie was an active member of many Riverhurst Committees including the U.C.W. and Rebekah’s Lodge. She was also involved with the Riverhurst Band, Rink, Scout and Guide Auxiliaries. Pearlie and Gil enjoyed travelling together; they spent many winters in Arizona. After Gil’s death, Pearlie, with her independent spirit, kept travelling. She journeyed often to see friends and family members. She was an avid reader of books and newspapers; she always made it a point to keep up with current events. Her interests included the choir, art, sewing, needlecraft and quilting. She always kept her crossword puzzles, knitting needles and crochet hooks handy and would never say “no” to a game of scrabble. Wednesday morning coffee with her good friends was a highlight of her week. Pearlie was a hardworking, intelligent, creative and adventurous person who enjoyed all that life had to offer.

Pearlie was predeceased as a young girl by her parents Samson and Jensine Jacobsen; her adoptive parents Carl and Clara Abrahamson; brother Lloyd and sister Violet; brothers Clayton and Doug Abrahamson; her loving husband Gil in 1986; sons Bruce in 2004 and Brian in 2002. She is survived by her children Keith (Gail), Dwight (Valerie), Lynette (Glen) Boos, Coralee(William) Farrell; ten grandchildren and 14 great grandchildren. The Krislock family would like to thank the staff of Iver Main Place and the Regency Manor for the excellent care that they provided for our mother. In lieu of flowers, memorial donations may be made in Pearlie’s name to Iver Main Place, Central Butte, SK, S0H 0T0, or Central Butte Health Care Foundation, for Regency Manor, Box 582, Central Butte, Sk, S0H 0T0.