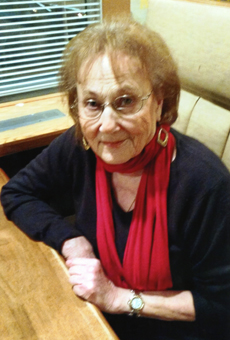 With heavy hearts we are sorry to announce our mother, Pauline Korney passed peacefully in her sleep in the early morning hours of August 27th, 2021.

She was born in Canora, SK, on December 28th, 1930 to George and Katherine Mallick.  Her childhood was spent in Tadmore where she attended Tadmore School, eventually moving to Endeavour where she met her husband, Paul Korney.

Pauline worked at numerous jobs before deciding to further her education at Kelsey SIAST.  She purchased Folks Barber Shop and continued to work as a Barber Stylist for many years, enjoying every moment.

Pauline enjoyed golfing, swimming, camping, gardening and music always made her smile.  She enjoyed her life in Moose jaw until her passing.  A huge thanks to the Saskatchewan Health Authority, all the homecare nurses who became her friends…she looked forward to all of their visits.

Predeceased by four brothers: Mike, Peter, John and William; three sisters: Anne, Mary and Victoria.  She is survived by three sisters: Sylvia, Joni and Cindy and also her very best friend, Lorette…who is her niece, but was more like a loving sister.

In keeping with Pauline’s wishes, a Memorial Service will be held at a later date.  Flowers are gratefully declined.  Arrangements are entrusted to Moose Jaw Funeral Home, 268 Mulberry Lane.  Michelle Ellis, Funeral Director 306-693-4550