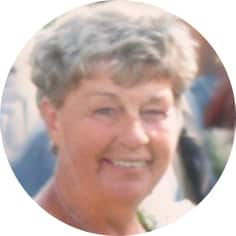 Wilma Gladys Knutt, aged 75 years of Moose Jaw, SK passed away peacefully on Saturday, January 4th, 2020 after a long illness.  She was predeceased by her father and mother, William and Gladys Wilson; brother, Douglas Wilson; father-in-law and mother-in-law, Gus and Wanda Knutt.  Wilma is survived by her husband of 52 years, Ken Knutt; children: Sandra (Brian), Chad (Allison), and Kyla (Mike); sister, Helen (Bill); brothers, Ken and Ron (Vicky); grandchildren: Kelsey (Tye), Karlee, Aiden and Rylan; and great-grandchildren, Ava and Braelyn.  She will be missed so much by all other extended family and friends. Wilma grew up in Brandon, MB and that is where she met Ken. They were married and soon after had Sandi before moving to Moose Jaw, SK. Then along came Chad and much later down the road, Kyla. Wilma worked at the ANAVETS for many years, then began working at the Golden Nugget Casino.  She then took care of her granddaughters and grandsons who she loved to spend time with and watch grow. She is known to them as Grandma Cocoa. Wilma loved attending the SSRR Gymkana Club for many years, where she made many friends and memories. If there was ever a Moose Jaw Warriors game on, you would find her sitting beside the radio listening to the game with a Pepsi in hand.  A special thanks to the staff at Providence Place. A Celebration of Wilma’s Life will be held at a later date in the spring.  In lieu of flowers, donations in Wilma’s name may be made to The Moose Jaw Humane Society, Box 1658 Station Main, Moose Jaw, SK S6H 7K7 or Juvenile Diabetes Research Foundation, PO Box 35058 RPO Sherwood Village, Regina, SK S4X 4C6.  Arrangements are entrusted to Moose Jaw Funeral Home, 268 Mulberry Lane. James Murdock, Funeral Director 306-693-4550.