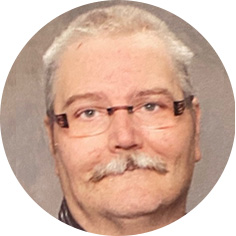 It is with great sadness that the family announces the peaceful passing of Paul Daniel Knights, aged 58 years of Moose Jaw, Saskatchewan on Tuesday, June 2nd, 2020 after a long battle with cancer.  Paul was born in Exeter, Ontario on August 16th, 1961.  He travelled overseas as a young boy with his family, his father being in the Air Force.  When they came back to Canada, they settled in Moose Jaw in 1967.  Paul would grow up and graduate from Riverview Collegiate, meet his wife and marry in 1987, and raise a family.  Paul will be lovingly remembered by his wife, Anna; children, Allan (Chandra), Rachel (Brett), and Pamela (Dalton); grandchildren, Naomi and Tegan; parents, Richard and Margaret; and sister, Carolyn.  Due to the current health situation, a Private Family Service will be held.  Flowers are gratefully declined.  As an expression of sympathy, donations in Paul’s name may be made to the Allan Blair Cancer Centre c/o Pasqua Hospital, 4101 Dewdney Ave, Regina, SK S4T 7T1.  Arrangements are entrusted to Moose Jaw Funeral Home, 268 Mulberry Lane.  Todd Sjoberg, Funeral Director 306-693-4550.