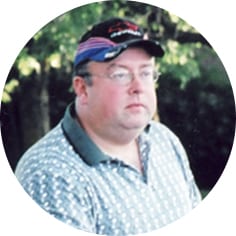 It is with great sadness that we must announce the sudden passing of our son, brother, uncle, nephew and friend, Wade Karst, on March 4th, 2008 in his home in Moose Jaw. Wade was survived by his parents Lenard and Isabel Karst of Moose Jaw, brother Darwin (Terri) Karst of Assiniboia, sister Laura (Scott) Ellis of Killdeer; nieces Stephanie Karst and her daughter Carys, Bailey Ellis and Taylor Ellis; nephews Corey (April) Ellis and their daughter Kayla, Lyndon Karst and Jared Karst. Wade was predeceased by his grandparents Sadie and William Swanson and Otto and Margaret Karst, his nephew Craig Ellis and infant niece Emily Karst. Wade was born on April 3rd, 1961 and was raised in Rockglen, Sask. until 1973 when the family moved to Verwood, Sask. He attended Rockglen and Assiniboia schools and worked at various locations in Assiniboia and Moose Jaw. He enjoyed truck driving but he loved auto mechanics. Wade enjoyed, when younger, playing fastball with his friends on the “Triple A” team. He belonged to the Assiniboia Car Club and loved going to car shows and especially his 95 Camero. He belonged to the Moose Jaw Radio control club flying his planes when ever he could. Wade enjoyed the family ski trips to the mountains and was looking forward to the family trip to Fernie this Easter break. Wade had no children but often joked that his family was his cats and is greatly missed by his new kitten Buddy. When it came to his nieces and nephews he was a gentle giant helping them all he could, either by assembling the Christmas toys or by helping them fix their vehicles. A Celebration of Wade’s life will be held on Saturday, March 8th, 2008 at 4:00 p.m. at the Moose Jaw Funeral Home, 268 Mulberry Lane, Moose Jaw, Sask. Donations in memory of Wade made to the Heart & Stroke Foundation of Saskatchewan, 279 3rd Ave. North, Saskatoon, Sask. S7K 2H8 would be appreciated by the family.