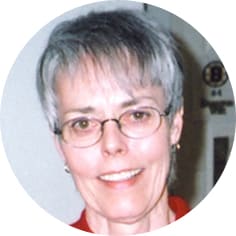 Carole Ann Johnstone (Scramstad) eldest daughter of Sig and Mabel Scramstad, went to be with her Lord on Sunday, November 30th, 2008 after a short illness. The Funeral Service will be held on Thursday, December 4th, 2008 at 2:00 p.m. in First Baptist Church. Pastor Barry Gammie will officiate. Carole was born in Unity, Saskatchewan on October 22nd, 1939. When she was 2 years of age the family moved to Montreal, where her dad was employed as a machinist at Canadian Propeller. In 1945 the family moved back to Saskatchewan to take up farming near Wadena. She graduated from Wadena High School in 1958 and that Fall entered Valley View Centre in Moose Jaw to train as a Psychiatric Nurse. It was in Moose Jaw that she met the love of her life Murray Johnstone. They were married in 1966 and have continued to make their home there. Carole loved animals, especially cats and had her pets for a number of years. She loved to garden and most of all any tasks that needed doing in her church. She was predeceased by her father, father-in-law, Uncle Leslie Garrison (Pauline) of San Angelo, Texas and by cousins Marcella Hokanson, Cranbrooke, B.C., Hugh Garrison of B.C., Margaret Moody of Ont., and Bradley Scramstad of B.C. She leaves to mourn her passing her husband Murray; her mother Mabel; her brother Wayne (Gert); sisters Leslie and Debbie (Brian); Aunt Sybil (Mil) Wainmaster of Yorkton; cousins Patricia Patrick of Kelvington, Sask., James (Donalee) and Tim (Priscilla) of Saskatoon, Terry (Marty) of Abbotsford, B.C., Laurie (Ben) of Penticton, B.C., Roy (Rhonda) of Golden, B.C., Barry of Suttle, Ont., Rod (Karen) of MacPherson, Ont. She is also survived by her mother-in-law Phyllis Johnstone of Moose Jaw; brother-in-law and sister-in-law Jerome and Judy Johnstone and family of Grand Prairie, Ab.; cousins Lynn and Bill Johnstone and family of Moose Jaw, Stewart Small of Winnipeg, Harvey and Sandra Johnstone and family of Veteran, Ab., and Jean Davis and family of Veteran, Ab. For those so wishing, memorial donations may be made in Carole’s name to World Vision, 1 World Drive, Mississauga, Ont., L5T 2Y4 or to First Baptist Church, 24 Oxford St. West, Moose Jaw, Sask. S6H 2N1.