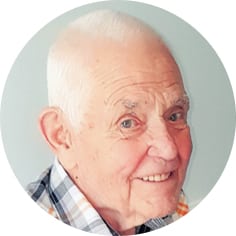 James “Jim” Harley Johnson, aged 88 years of Moose Jaw, SK passed away on Wednesday, August 21st, 2019 surrounded by his family.  Jim was born in Moose Jaw on July 18th, 1931.  The family lived in Moose Jaw, except for a few years in Weyburn, SK, until his passing.  Jim married Esther Herber, the love of his life, on October 31st, 1953 and together they raised 5 wonderful children.  Jim would do anything for his family. Plumbing was his chosen trade, working at various companies throughout the city.  He also had a great knowledge of carpentry, electrical and anything mechanical. He would always be there to help, and his work ethic was impeccable.  He willingly gave of himself to help anyone in need. Jim was a loyal member of the Eagles Club AERIE #3395, and a respected member of the Lynbrook Golf Club.  He played in many tournaments at the club, also helping with renovations and plumbing at the club. He also enjoyed curling, bowling, dancing the 2-step and polkas, going to bingo, playing his favorite 6/49 numbers and pull tab tickets.  If you knew Jim, you knew he had a sense of humor that can only be described as legendary. His cheeky little smile always made everyone laugh along with his joke. He was predeceased by his mother and father, Ethel and Chester Johnson; brother, Phi; sister, June; and son-in-law, Marvin.  Jim is survived by his loving wife of 65 years, Esther and their children: Janet (Keith), Elaine, Vicki (Chris), Harley (Debbie), Kim (Ken); grandchildren: Travis, Melissa, Neil (Jackie), Shawn (Liz), Marnie (Steve), Erika, Michelle, Kenton (Ashley), Kayla and Connor; great-grandchildren: Rylan, Brayden, Kennedy, Kayden, Brooklyn and Noah; sister, Lynda (Merv); brothers, Robert (Margaret) and Keith (Wendy); sisters-in-law, Marilyn and Elsie; brother-in-law, Dave; as well as many nieces and nephews.  As per Jim’s wishes, a Private Family Service will be held. As an expression of sympathy, donations in Jim’s name may be made to the Canadian Cancer Society, 1910 McIntyre St, Regina, SK S4P 2R3.  Arrangements are entrusted to Moose Jaw Funeral Home, 268 Mulberry Lane. Gary McDowell, Funeral Director 306-693-4550.