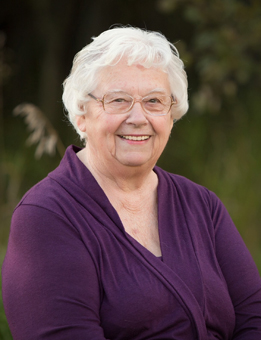 Joyce Mary James, aged 90 years of Regina, SK passed away on Sunday, November 7th, 2021.  Joyce will be lovingly remembered and sadly missed by her daughters, Gail James and Shannon (Roy) LaBuick; and grandchildren: Robert, Geoffrey and Tylee LaBuick.  Joyce is survived by her sisters, Phyllis McLaren and Lorraine Elliott; sister-in-law, Nellie (Doug) Clubbe; as well as numerous nieces and nephews.   She also leaves to mourn, her fur kids: MoJo (who she adored) and Jack (who she tolerated).

Joyce was born in Moose Jaw, Saskatchewan.  She grew up in the Mossbank area, but mostly in Chaplin, SK where she was the first Grade 12 graduate of Chaplin School.  Joyce was employed with Saskatchewan Minerals and that is where she met her husband, Tom.  She gave up her position at the sodium plant in Chaplin as they moved to Fox Valley, Bishopric (Moose Jaw) and eventually back to Chaplin where her main focus was on raising their girls and tending their small acreage across from Valjean.  She was always there to lend a hand with community, school, 4-H projects or to help a friend.  If anyone stopped by for a visit – tea was made!!!  She was a kind, gentle soul with an infectious smile and laugh.  Joyce enjoyed knitting, sewing, gardening, canning, word searches, crosswords, baking, watching Jeopardy (NO talking was allowed) and time spent with her 3 grandchildren.

She was predeceased by her husband of 59 years, Tom James; parents, Ernest and Amelia Tylee; brother, Charles Tylee; birth mum, Irene Warner; her fur kids Scruffy (who she adored) and Fluffa Kitty (who she also tolerated).

The family wishes to express their sincere appreciation for the exceptional care she received from the nurses and doctors involved with her stay at the General Hospital in August/September.  We would also like to thank the SHA Home Care, the nurses and doctors at the Pasqua Hospital for making mum’s last days bearable, not just for her but also her daughters as well, as well as her family doctor, Dr. Offiah and his staff at the Rochdale Medical Clinic.  Words cannot express our gratitude, especially everything the medical staff have to endure at this time.  Thank you so much.

As per Joyce’s wishes, there will be no Funeral Service.  In lieu of flowers, donations in Joyce’s name may be made to the Moose Jaw Humane Society, P.O. Box 1658, Moose Jaw, SK S6H 7K7.  Arrangements are entrusted to Moose Jaw Funeral Home, 268 Mulberry Lane.  Michelle Ellis, Funeral Director 306-693-4550