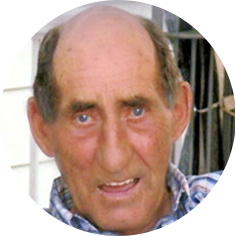 Ronald Henry Hennenfent passed away peacefully at home on Thursday, November 2nd, 2017 with his wife of 58 years by his side.  Ron was born on June 23rd, 1937 at home on the family farm near Rowletta, SK to Joe and Mary Hennenfent.  He attended school at West Marquis, Wilson and Premier, then continued on to agriculture school in Swift Current and Moose Jaw, SK.  He then returned to work on the family farm.  At 22 years old, Ron married Myrtle Lutz and together they had six children, as well as many grandchildren and great-grandchildren.  Ron most enjoyed his life on the farm.  He loved coming up with new ideas for the many challenges that would time and time again present themselves in the field, farmyard or chicken barn.  His inventive spirit was a valued asset for many years as he worked tirelessly.  Ron was the first to deliver a load of grain to the Rowletta Elevator in 1952.  He was proud to help build the Rowletta Civic Centre, and he continued to put in many years of hard work at the hall.  Ron was a hard-working, dedicated husband and father.  He was known as a proud and gentle man of few words with a keen sense of humor.  Ron was never too busy to share a moment to talk and a smile with friends and neighbors.  He was predeceased by his father and mother, Joe and Mary Hennenfent (née Bruce); brothers: Joe, Roy and Ray; and sisters, Rosie and Bessie.  Ron will be lovingly remembered by his wife, Myrtle; daughter, Bonnie (Rick) Clubbe; daughter, Lori (Randy) Moysey; daughter, Sandi Hennenfent (Blair Barnett); daughter, Shelli (Steve) Muhle; daughter, Rhonda (Kenric) Phillips; and son, Ryan (Dusti) Hennenfent.  Special thanks to the Five Hills Health Region Palliative Care Services, especially Janet Lalonde and Shawna Camphaug.  The Funeral Service will be held on Tuesday, November 7th, 2017 at 1:00 p.m. in Moose Jaw Funeral Home.  Pastor Marvin Seaborg will officiate and interment will take place at Sunset Cemetery.  In lieu of flowers, expressions of sympathy may be made in Ron’s name to the Rowletta Civic Centre, PO Box 129, Caronport, SK S0H 0H0 or Stars Air Ambulance, 2640 Airport Rd, Regina, SK S4W 1A3.  Arrangements are entrusted to Moose Jaw Funeral Home, 268 Mulberry Lane.  Michelle Surtees Funeral Director 306-693-4550