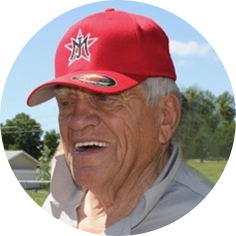 It is with profound sadness we announce the sudden passing of Lyle Helland on Tuesday, October 23rd, 2018 at the Dr. F.H. Wigmore Regional Hospital in Moose Jaw, Saskatchewan due to complications after a brief illness.  He was predeceased by his father, Alfred; mother, Lillian; siblings: Kenny, Gerry and Barry; and his favourite daughter-in-law, LeeAnne.  Lyle is survived by his loving wife, Frani; children: Teri (Greg), Dale, Traci (Randy), Dean, Tevi (Mark), Trelee (Bruce) and David; ten grandchildren: Amber (Rion), Shasta (Dustin), Ashley (Curtis), Shayn (Paula), Mark, Victoria, Jiness, Kristian, Reece and Jake; seven great-grandchildren: Zak, Jackson, Mya, Reid, Presley, Logan and Mason; brother, Lorne; sister, Darolyn (Robert); and brother-in-law, Grant (Loretta).  Lyle was born on the farm near Ardill, Saskatchewan on December 1st, 1933.  As a child he and his siblings were active and competitive in a variety of sports.  That competitive love of sports was passed down to all of his family. Known for his loud motorbike on the streets of Mossbank, he attracted his bride of 60 years Frances and during their time together they raised a family of seven children in Moose Jaw, Saskatchewan.  Lyle worked as a farmer and for the City of Moose Jaw, Cypress Paving and Wilms Transport, and for the past 25 years he was self-employed. Lyle became well known for his endeavours in bringing the WHL to Moose Jaw in 1984 and as a talent scout for the Victoria Cougars and Medicine Hat Tigers.  As a scout for the Medicine Hat Tigers he was fortunate enough to win two Memorial Cups. Lyle and Frani were deeply appreciated for their dedication to the running of Memorial Field and he was well known for the “Lyle Burger”. Lyle and Frani spent many years travelling. They went to Palm Springs, Hawaii, Norway and across Canada.  Lyle was known as the unofficial Mayor of Moose Jaw. He was a pillar of the community, everyone’s biggest fan and had an eye for a special talent in every kid. You could not go to a game or a practice without seeing Lyle in the stands cheering everyone on. To our family he was our husband, Dad, Poppa, Grandpa and Great-Grandpa but to everyone whoever met him he was their friend and he will be sorely missed.  Please join us at a Celebration of Lyle’s Life at The Moose Jaw Cosmo Senior Citizen Centre, 235 3rd Avenue NE, Moose Jaw, SK on Saturday, November 3rd, 2018 at 1:00 p.m.  In lieu of flowers the family respectfully asks you to make a donation in Lyle’s name to Moose Jaw Minor Hockey, 370 Saskatchewan St W, Moose Jaw, SK S6H 2T2 or any local sports organization of your choice.  Arrangements are entrusted to Moose Jaw Funeral Home, 268 Mulberry Lane. Michelle Surtees Funeral Director 306-693-4550