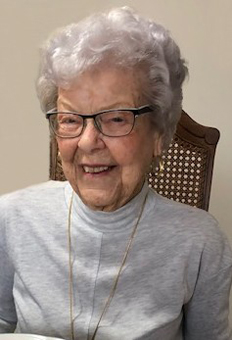 Ellie Margaret Hatch (née: Wakelam), aged 97 years of Moose Jaw, SK passed away on Monday, February 7th, 2022.  Ellie was born on March 2nd, 1924 to Rufus and Ethel Wakelam (née: Tiller) in LeRoy, SK (District).  She was the second oldest of 5 brothers.  Being the only girl did make her a bit of a princess (so the boys said) but this fine lady also new the meaning of hard work.  Growing up on the farm you did what you had to and what you were told to do, with a little family fun thrown in there too.  Rufus passed too early so Ethel was left to raise and provide for this family, a job she did well as they were a strong and healthy bunch.  As they all started leaving the nest, Ellie found herself smitten with a tall handsome fella…Maurice (Tobie) Hatch.  His parents owned the store in LeRoy.  They were married in Regina, SK on April 25th, 1951.  Tobie was a good businessman and Ellie was his right-hand woman.  Over their working careers they owned or operated Hotels/Motels in Kennedy, Rosetown, North Battleford, Saskatoon and Prince Albert, SK.  After many years, they left the hotel business and moved to the farm at Elbow, SK.  While farming, their neighbors became their family as well and that is how Bob McLean became a lifelong friend of Ellie’s.  Bob’s dad passed when he was 15 so Tobie taught him how to drive combine and truck.  When Ellie wasn’t hauling grain she was cooking and providing a cold beer at every truck stop!!  Traveling to Arizona was the highlight of the winter months and Blackstrap in the summers.  They made many friends from their business years, neighbors and family all were welcome at any time.  They knew how to work hard and they also knew how to play hard.  So a visit to Tobie and Ellie’s would never disappoint!!  In 1979 they bought a house in Moose Jaw on Marshall Crescent, where she would soon meet her angel on earth, Marion Birkett, who would eventually be her caregiver and best friend until the end.  Throughout the years trips were taken to visit her family wherever they may be.  They had a van that had a party packed right in it, it was always exciting when they came to town.  Family helped Ellie in so many ways when Tobie was diagnosed with Parkinson’s and then when he passed in 1983.  A couple years later an old friend, Jack Schoenau, became her companion, and she loved his family like her own.  They did a lot of traveling as well while their health allowed.  Jack passed in 2010 which broke her heart to lose another love.  In 2015 she sold her house and moved to the Caleb until November of 2021 when she moved to West Park Crossing.  She battled cancer 3 times and survived them all with dignity and beauty like only Ellie could.  She always looked so perfect.  How she dressed, hair, nails and jewelry…oh she loved her jewelry and shopping in general!  She was small but mighty, strong willed and pretty much told you how it was going to go and how you get there!!  But in the same breath she told you she loved you and if you were true to her, she held you tight in a hug every time you left her.  We will miss her stories, her sense of humor and the “sitting down for a drink”.  She was re-united with all her family on Feb 7th, 2022 and she is enjoying all their laughter once again.

The Funeral Service to honor Ellie’s Life will be held on Friday, June 3, 2022 at 11:00 a.m. in Moose Jaw Funeral Home.  Rev. Deacon Arleen Champion will officiate.  For guests who are unable to attend, you are invited to watch the service virtually by going to www.moosejawfuneralhome.com/webcast/.  Arrangements are entrusted to Moose Jaw Funeral Home, 268 Mulberry Lane.  Gary McDowell, Funeral Director 306-693-4550