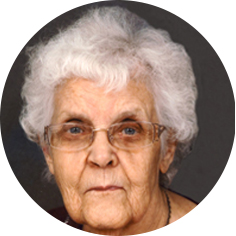 Eunice Leone Hansford, aged 88 years of Moose Jaw, SK, passed away on Wednesday, April 5th, 2017 with her grandson Scott by her side.  She was reunited with open arms by her husband, George and daughter, Heather Atkinson, along with her mom and dad, Rowland and Alma Parks; brothers, Rowland and Donald; sons-in-law, Kris Goalen and Glenn Atkinson; and her granddaughter’s boyfriend, Joey Mauch.  Eunice will be missed by her children, Glen, and Lynn (Clayton) McKenzie; grandchildren: Lakota, Cole, Chelsea, Cheyanne, Scott (Blythe), Amanda, Mellesa, Karli, Jessica (Austin), Braeden, Austin, and Josie; and great-grandchildren: Kaiden, Ellie, and Leonardo.  Eunice was born and raised in Haywarden, SK on March 2nd, 1929.  She earned her Psychiatric Nursing from the training school in Portage La Prairie, MB.  Eunice worked as a supervisor in Portage La Prairie until her father’s passing and felt that she needed to move back to Moose Jaw to help support her mother.  Eunice met George Hansford on a visit back to Haywarden, and in no time they were married.  Eventually Eunice and George bought a house with enough room for them, their children, and Eunice’s mother Alma.  Eunice worked as a CNA (LPN) at Valley View Centre, Providence Hospital, and the Union Hospital, as she did not write the Saskatchewan registration for her Psychiatric Nursing.  Eunice was a very involved grandma, helping out with whatever she could, including babysitting so their mom could work, go to school, or needed to just get away.  Grandma could always be counted on and always had an open door for her family.  She accepted new people into her family with open arms and no questions asked.  Eunice will be forever missed.  The family would like to thank the staff at Extendicare and Pioneer Lodge for caring for Eunice these past 5 months.  An extra thank you to the staff at Pioneer Lodge, not only for the care they provided to Eunice, but for the kindness and time offered to the family.  Eunice’s daughter Lynn would like to thank her husband Clayton, from the bottom of her heart, for helping her care for both of her parents and loving them like they were his!  As well, thank you to her children for taking time to help care for their grandparents.  Grandma and Grandpa loved you all so much.  A Memorial Tea will be held on Tuesday, April 11th, 2017 at 6:00 p.m. in the Harvey Room at Moose Jaw Funeral Home.  In lieu of flowers, donations in Eunice’s name may be made to the Lupus SK Society Inc, Box 88 – 103 Hospital Dr, Saskatoon, SK S7N 0W8.  Arrangements are entrusted to Moose Jaw Funeral Home, 268 Mulberry Lane.  Gary McDowell, Funeral Director 306-693-4550