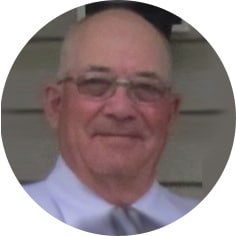 Charles Millar Hackney passed away peacefully on Sunday, January 20th, 2019 at Regency Manor care home in Central Butte, SK.  He was the youngest of eight children and was predeceased by his 4 sisters: Margaret, Helen, Jean, and Millicent; and 3 brothers: Mac, George and Doug.  Millar leaves to mourn his loving wife of 57 years, Marian Hackney; and his sons, Darrell (Diane) Hackney and Ken Hackney.  He will also be missed by his grandchildren: Curtis (Charla), Lisa and Adam; great-grandchildren: Keaton, Alisha and Dylan; as well as several nieces, nephews and other family members.  Millar was born in Brownlee, SK in 1935 and as the son of a Presbyterian minister, lived in several towns throughout Saskatchewan including Togo and Pennant. His family eventually moved to Riverhurst, SK in 1950 where Millar continued to live for the rest of life.  Millar attended Riverhurst High School where he met his future wife Marian. After completing high school, he worked at a variety of jobs including transport driver, elevator agent and mechanic. He also worked for many years as a heavy machinery operator with Pomeroy Construction.  Millar and Marian were married in 1961 and started farming the same year. Millar remained on the farm until 2008, when he retired and moved to Riverhurst. He was always an active member of the Riverhurst community and was heavily involved in the local Lion’s Club, Rec. Board, Park Board, School Board and minor sports.  He was particularly proud of his involvement in the approval and construction of the Rusty’s Coulee Marina at Palliser Park. In recognition of his years of volunteerism, Millar was awarded the Diamond Jubilee Medal for distinguished service to his community in 2012. Millar was an avid golfer and also enjoyed hunting, fishing and travelling.  He will be fondly remembered for his friendly, fun-loving personality and willingness to help out when needed. A Celebration of Millar’s Life will be held on Friday, February 22nd, 2019 at 2:00 p.m. in the Riverhurst Community Hall.  As an expression of sympathy, donations in Millar’s name may be made to Regency Manor Auxiliary, P.O. Box 40, Central Butte, SK SOH OTO. Arrangements are entrusted to Moose Jaw Funeral Home, 268 Mulberry Lane.  Calvin Gammel, Funeral Director 306-693-4550