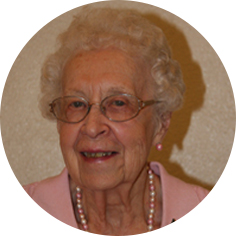 Cecelia Marie Hackel, aged 96 years of Moose Jaw, SK, passed away peacefully in her sleep on Thursday, May 11th, 2017.  The Funeral Mass will be celebrated on Wednesday, May 17th, 2017 at 1:00 p.m. in St. Joseph’s Roman Catholic Church, 1064 3rd Ave NW, Moose Jaw, SK.  Father Rick Krofchek will be the presiding celebrant and interment will take place in Sunset Cemetery at a later date.  Cecelia was born on March 13th, 1921 in Moose Jaw, SK to parents Hattie and John Parrott, and she shared many rural experiences with her sisters Teresa and Rita.  She was predeceased by her husband, William (Bill); parents, Hattie and John; and sister, Teresa.  Cecelia leaves to mourn: her sister, Rita; daughter, Elaine of Regina, SK; sons: Donald of Edmonton, AB, Larry (Robin) of Regina, SK, and Lloyd (Viola) of Moose Jaw, SK; grandchildren: Kathleen, Carrie, Darrin, Aaron, Jordan, and Alex; great-grandchildren: Mason, Duncan, Saydie, Will, Nate, and Kayden; as well as numerous nieces and nephews.  Cecelia grew up in the small towns of Marquis and Keeler, SK.  As a young woman, she attended the Normal School in Moose Jaw, obtaining her Teaching Certification.  She began her 24 year teaching career in Lampman, SK then moved on to teach in Ralph, near Weyburn, SK.  In both places she taught in a one-room country school, grades one to eight.  During this time she met her future husband, William Hackel.  Once he served his time overseas in the Canadian Army during WWII, they were married on July 2nd, 1946 and celebrated 57 years of marriage.  After moving to Moose Jaw to set up their home and having four children, Cecelia returned to teaching at St. Louis College.  When this high school became a part of Vanier High School, Cecelia taught Algebra and Geometry until retiring in 1981.  As an educator in the classroom, she also helped her students with personal problems by listening and offering guidance.  In her retirement, she enjoyed time spent with her grandchildren and great-grandchildren, her loving pets, sewing, knitting, and cheering for the Blue Jays.  She especially enjoyed encounters with her former students over the years.  In the summer of 2016 she hosted an Afternoon Tea at her current residence, Chez Nous (St. Louis College), as part of the St. Louis College and Vanier High School 50th Reunion.  This event was of particular enjoyment for Cecelia as she relived stories of the past and caught up on the current status of her students.  Cecelia loved her friends and family, and would always be there to lend a hand, encouragement, and support in any way that was needed.  She drew strength from her Catholic faith and was a regular member of St. Joseph’s Church and the Christian Women’s League for many years.  Her family loves her and misses her dearly, but will always remember her fondly for her gracious life.  As an expression of sympathy, donations in Cecelia’s name may be made to the Vanier 50th Reunion Scholarship Fund c/o Vanier Collegiate, 324 Macdonald St W, Moose Jaw, SK S6H 3W2.  Arrangements are entrusted to Moose Jaw Funeral Home, 268 Mulberry Lane.  Gary McDowell, Funeral Director 306-693-4550