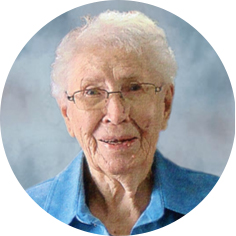 It is with heavy hearts that we announce the passing of Madeleine J. Gunningham.  She went to be with the Lord on August 21st, 2020 at the age of 99 years.  Born to Peter and Alice Pederson, on the farm west of Davidson, on December 25th, 1920.  She grew up with four older brothers before attending Normal School in Moose Jaw (1939-1940).  She taught in a few country schools before meeting Don Gunningham.  Don and Madeleine were married in 1945.  They began their lives on the farm in the Chamberlain District where they lived and worked together ‘til 1998 when they moved to Moose Jaw, first to their home on Ross Street, then to Mulberry Estates in 2006 as Don’s health was failing.  Madeleine continued to live at the Mulberry ‘til 2018 where she enjoyed all the activities that were offered.  It was a happy time for her.  By then she needed a little more care which resulted in a move to Chez Nous.  Mom loved it there as she experienced excellent care with wonderful people. The family would like to thank the management and staff at Chez Nous for the exceptional care that she received.  Madeleine was predeceased by her husband, Don, of 62 years; her parents, Peter and Alice; her brothers: Arnold, Sverre, Lawrence and Norman.  She is survived by her son, Glen (Dorothy); grandson, John (Tina) and their boys, Sawyer and Eliah; grandsons, Graham (Vania) and Brent (Mary).  Madeleine will be greatly missed by her family and all that knew her.  She will be laid to rest in a Private Ceremony with only immediate family in attendance.  In lieu of flowers, donations in memory of Madeleine may be made to the Salvation Army 175 – 1st Ave. N.E. Moose Jaw, SK S6H 0Y9 or the Moose Jaw Health Foundation 55 Diefenbaker Drive, Moose Jaw, SK S6J 0C2.  Arrangements are entrusted to Moose Jaw Funeral Home, 268 Mulberry Lane.  Gary McDowell, Funeral Director 306-693-4550.