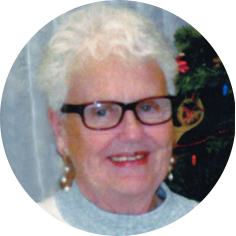 Elinor Ada Grajczyk (née: Moysey) passed away Tuesday, January 19th, 2021 at the age of 82 years.  Elinor was the youngest of seven, born on June 4th, 1938 at Moose Jaw, SK to parents Leonard and Ada Moysey (née: Heath).  She was raised in the Buffalo Pound Lake district until her parents moved into Moose Jaw in 1951.  She attended Blofield School, Victoria School and Technical High School, now known as Peacock Collegiate.  She left high school in grade 12 to work at CPR as a teletype operator.  She held other office jobs, including several months in Vancouver, BC before returning to Moose Jaw when her mother became ill.  While working at Robin Hood Flour Mills, Elinor met Alex Grajczyk whom she married February 10th, 1959.  Elinor was blessed with four boys: Patrick (Mitch), Peter, Jeffrey and Kelly.  Elinor was a hard worker, raising her sons in Moose Jaw and tending the huge garden and other duties at the family farm at Courval, Saskatchewan.  Once the boys got older, Elinor worked at Eatons, took a job in the office at Vanier Collegiate where her sons attended school, much to their chagrin, and then at the Catholic School Board office.  Subsequent to that she worked at CTK Plastics and Tunnels of Moose Jaw.  Elinor was independent, driving to the West Coast and California different times to visit family.  She was very thoughtful, putting much love into making quilts and other treasures for family members and took great pride in her flower garden.  She was dedicated to preserving family history for her children and made extensive family trees and several scrapbooks to document it.  Elinor adored her grandchildren and attended many of their events, including homespun variety shows at Ardill, SK where she teamed up with various granddaughters in acts for the family show.  She was always a good sport and we have such happy memories of those events.  Elinor had a great sense of humour and was so loved.  She became affectionately known as Gramtrude, first by the grandchildren and then eventually by extended family.  Elinor had many long-time friends including Linda and Marshall, Lou and Thelma, Barry and Barb, Stella and Martha, enjoying camping trips and regular gatherings with them.  Elinor loved animals, having many pets over the years, leaving behind her precious dog Chico and cat Bandit.  She was the centerpiece of the family and will be missed beyond words.  She was predeceased by her parents, Leonard (1973) and Ada (Heath) Moysey (1987); siblings: Gertrude (2014), Frank (2018), Joan (2012), John (1994), Len (2013), and Fred (2006), as well as their spouses.  Left to cherish Elinor’s memory are her husband, Alex; sons:  Mitch (Ana) and his children Lorenso and Maya; Peter (Lisa) and his children Jessica (and her mother Charlotte), Julian and Jonah; Jeffrey (Carolyn) and his children Isabella and Sophia; Kelly (Janice) and his children Sean and Katie; brother-in-law, Ed Graychick (Donna deceased 2014); sister-in-law, Bernie Kahahawai (Joe deceased 1998); as well as many nieces, nephews and friends.  A Graveside Service will be held at St. Columba Anglican Church at a later date.  In lieu of flowers, donations may be made in Elinor’s name to the Free to Be Me Animal Sanctuary, Box 1685, Moose Jaw, SK S6H 7K7.  Arrangements are entrusted to Moose Jaw Funeral Home, 268 Mulberry Lane.  Todd Sjoberg, Funeral Director 306-693-4550.