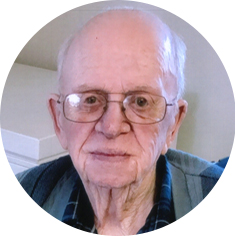 Calvin Charles Graham, aged 87 years of Moose Jaw, SK passed away Tuesday, December 15th, 2020.  Calvin was born in Avonlea, Saskatchewan to Charles and Mary Graham.  He grew up on his parent’s farm in Hearne, Saskatchewan and travelled to Thompson School on his faithful Shetland Pony Bud.  Calvin worked at the Claybank Brick Plant for many years until he purchased farmland north of Claybank.  He married Joy Ireland and together they raised their three children: Shirley, Allan and Gary on the family farm.  Over the years, Calvin enjoyed many fishing and camping trips in his Boler trailer.  Camping would become a long time hobby of his.  In his later years, he farmed with his companion Edna Tribier by his side until her passing.  After farming for forty years, Calvin retired to Moose Jaw.

Calvin later married Bernice Mohns.  Together they shared many happy years travelling in their fifth wheel trailer to Yuma for their winters, and throughout Saskatchewan as part of the Band City Good Sam Camping Club for the summers.  Throughout their travels, they made many friends along the way and on their last trip to Yuma, Calvin celebrated his 80th birthday with them.  Calvin’s chuckle, charm and sense of humor have left a mark on all those who knew him.

The family would like to thank the Dr. F.H. Wigmore Regional Hospital, Moose Jaw EMT’s, Home Care from Five Hills Health Region, Pioneer Lodge and Providence Place for helping Calvin through his last few years to be as healthy as he could be.

Due to public health restrictions, a Service will be held at a later date.  In lieu of flowers, donations in Calvin’s name may be made to the Lung Association of Saskatchewan, 1231 8th St E, Saskatoon, SK S7H 0S5.  Arrangements are entrusted to Moose Jaw Funeral Home, 268 Mulberry Lane.  James Murdock, Funeral Director 306-693-4550