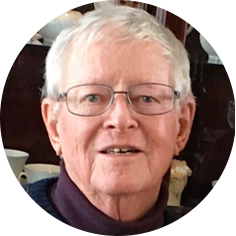 It is so difficult to sum up a lifetime in a few short paragraphs, but with great sadness we announce the passing of Larry Francis Gibney, aged 84 years of Moose Jaw, Saskatchewan on Saturday, August 29th, 2020.

Larry was born February 9th, 1936 in Sturgis, Saskatchewan.  He began his 35 year career with SaskTel in Moose Jaw and then moved to Estevan, SK where he met his wife Johanna.  His job then took him to Regina, SK and finally back to Moose Jaw, where he retired in 1989 after reaching second level management.

Larry was a very “vocal” little league and minor hockey coach for many years.  He loved fishing, camping, and curling.  Larry enjoyed music and in his early years played the saxophone in an orchestra and performed at dances in small towns in Saskatchewan.  He continued his love and appreciation for music throughout his life.

Larry was talented in woodworking and created beautiful furniture and toys.  He always looked forward to watching his grandchildren’s sporting events and seldom missed a game.  The most important thing in his life was his family.

Larry and Johanna enjoyed travelling to Hawaii and Mexico in their retirement years, along with numerous gambling bus trips to the United States.

We would like to thank the Moose Jaw and District EMS Paramedic Services and the staff at the Dr. F.H. Wigmore Regional Hospital for their effort and compassion.  A very special personal thank you to Dr Mark Brown, who has been Larry’s family doctor since 2001.

Due to the current health situation, a Private Family Service will be held with Father Rick Krofchek officiating.  Flowers are gratefully declined.  As an expression of sympathy, donations in Larry’s name may be made to STARS Air Ambulance, 2640 Airport Road, Regina, SK S4W 1A3.  Arrangements are entrusted to Moose Jaw Funeral Home, 268 Mulberry Lane.  Todd Sjoberg, Funeral Director 306-693-4550.