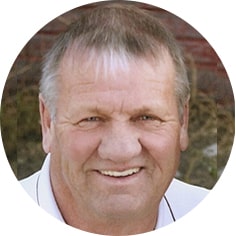 Clarence Edward Gerbrandt, age 67 years of Chaplin, SK passed away early in the morning on Friday, April 26th, 2019.  Clarence was born on June 15th, 1951 in Herbert, SK.  He was predeceased by his son, Michael Gerbrandt; his parents, John and Mary Gerbrandt; his brothers, Gordon Gerbrandt and Herman Gerbrandt; brother-in-law, Murray Kraway; his father-in-law, Henry Bauck and mother-in-law, Aileen Bauck.  Clarence will be so dearly missed by his wife, Terrill Gerbrandt; daughter-in-law, Julie Gerbrandt, grandchildren: Janaya, Kianna, and Joel;  son, Dean (Julie) Gerbrandt, grandchildren: Robyn (Brandon) and great-grandson, Brody, Sarah (Kurt), Tilynn (Adam), and Brendan; daughter, Lacey (Matt) Owens, grandchildren: Coulson, Cooper, and Cadence; god-children: Tyler, Riley, and Shayla; sister, Evelyn; sister-in-law, Barbara; brother, Andy (Alice); sister, Judy (Dennis); sister, Shirley (Ron); brother, Ken (Val); brother, Ron (Bonnie); brother, Elmer (Sherry); brother, Harold (Cheri); and sister, Davina (Kent); brother-in-law, Rod (Debbie); brother-in-law, Dwight (Joan); brother-in-law, Mitch (Brenda); all of his nieces and nephews; his aunts and uncles; his many cousins; and so many dear friends.  Clarence grew up on a farm near Kelstern, SK. He worked hard on the farm and went to elementary school in Kelstern and high school in Morse, SK. His family attended the Church of God in Herbert and would enjoy dinners at their grandparents every Sunday. Upon completion of his grade 10, Clarence moved to Saskatoon, where he lived with his Uncle Henry and Aunt Kay, and he studied carpentry at SIAST Kelsey. Clarence was a very hard worker with many talents and endless natural abilities. He will always be remembered as “MacGyver” because he could find a way to fix absolutely anything.  Not only did he have talent in carpentry and mechanics, he also had a gift in music and taught himself to play guitar. Clarence put his talent to work building many houses in southwest Saskatchewan before moving on to own a grocery store in Herbert with his father and brother Ron, in addition to playing bass guitar in a band called the Coke a Cola Cowboys. On May 11th, 1974 Clarence married Terrill Bauck and they moved to Val Jean, SK to farm with Terrill’s family.  They were blessed with three children who all looked up to their parents with the most sincere admiration.  Clarence was a very dedicated farmer. He took pride in growing the farm legacy and going on to farm together with his wife and two sons.  Clarence had so much to be proud of but to him, nothing topped being a Papa to 10 grandkids and 1 great-grandson. He spent countless hours playing on the floor with his grandbabies, taking them to work with him, watching all of their activities, constructing a tree-fort, camping and taking multiple vacations, riding all the rides at Disney, family fishing trips up North, and just endless hours visiting at the farm.  Clarence loved to have a good time. His siblings, cousins, and friends would all agree that he was a fun guy to be around. He enjoyed listening to a good band, taking Terrill for a spin on the dance floor, bringing out the guitars and having a jam session, celebrating the end of a branding with his buddies, playing a round of golf, reminiscing with his brothers, and taking in some good laughs. He loved to travel and cherished the vacations he took with family and with friends, as well as spending his winters in Yuma where he made many more great friends.  No matter what it was, Clarence simply just loved his family and his friends so dearly and so deeply. A Memorial Service will be held in Clarence’s honour on Tuesday, April 30th, 2019 at 2:00 p.m. in Moose Jaw Funeral Home with Pastor Marvin Seaborg officiating.  Friends and Family are welcome to share in a time of fellowship following the service at the Heritage Inn.  As an expression of sympathy, donations in Clarence’s name may be to the Chaplin Lutheran Church, Box 187, Chaplin, SK S0H 0V0.  Arrangements are entrusted to Moose Jaw Funeral Home, 268 Mulberry Lane. Gary McDowell, Funeral Director 306-693-4550 www.moosejawfuneralhome.com