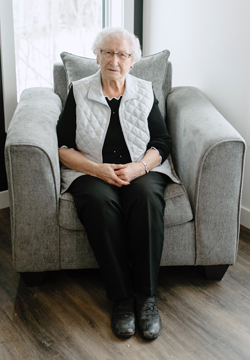 Eleven days short of her 98th birthday our amazing Mom, Hattie Gane passed away on Friday, June 17th, 2022 surrounded by her family in Central Butte, SK.

Hattie was born in Mrs. Heihei’s house in Chaplin, SK to Walter and Lottie Holloway on June 28th, 1924.  She grew up in the Droxford district – close neighbours with Drysdale’s and Weinbender’s.  Mrs. Bowden had a store in Uren and Hattie worked in the store, and also as a housekeeper for her.

Stan Gane got her attention at a dance and they were married May 25th, 1945 in Caron, SK.  Her sister Alma Higgins was her Maid of Honour and Vic Hanson was the Best Man.  They travelled by train to Moose Jaw to celebrate and there was a wedding supper for them at Grandma Gane’s when they got home.

Hattie and Stan lived on the family farm at Halvorgate, where they started their family.  Elaine was born in 1946, Sandra in 1951, Karen in 1956 and finally their first boy, Gerald in 1964.  After Stan had his first heart attack in 1960, they moved to Chaplin and later to Uren, SK.

Hattie and Stan were both employed at the 1&19 BA.  They worked for Lorne and Betty Lindquist and became good friends.  Hattie worked as a waitress and Stan in the garage.  Eventually they moved back to Halvorgate and farmed for a few more years.  Due to health issues they sold the farm and moved to Central Butte in 1967.

Hattie started working at the hospital and made many new friends.  She was employed there for over 10 years and retired in 1985.

Hattie and Stan bought a camper and toured around the province visiting family and friends.  The family all camped together at Palliser Park and Bob Petersen named our favourite spot “Stanley’s Mission”.  Hattie and Stan joined the Senior’s Centre in Central Butte and started playing cards.  After Stan passed away in 2000, Hattie became very involved – playing floor shuffleboard, serving soup and sandwiches, and continuing to enjoy many card games.  She made many close friends including Edna Paysen and many others who have gone before her.

Hattie’s house was a daily gathering place for all her family drinking coffee and eating fresh cookies.  She was so fortunate to live in her home independently and still driving her own car until she was almost 98.  She loved her family fiercely and never wanted anyone to fuss over her or be the centre of attention.  On June 8th, 2022 she won the 50-50 playing Street Bingo and took home $530!

She was predeceased by her parents, Walter and Lottie; in-laws, Fred and Gertrude; husband, Stan; granddaughter, DeeAnn; son-in-law, Robert; siblings: Ernie, Willie (Ruby), Annie (Charles), Mable (Lawrence), Alma (Charlie), and Rita (Chris); brother-in-law, George (Gene); sisters-in-law, Gertie (Max) and Lily (Albin, Edgar).  Hattie is survived by her children: Elaine (Lawrence) Schultz, Sandra Menzies, Karen (Gord) Houseman, and Gerald (Beth) Gane; grandchildren: Carla and Rick Loeppky and their children Randi, Tyler (Brittany), Brett (Dave) and their daughters Ellie and Caroline, T.J. (Jayne), Darren Schultz and son Grady, Clayton (Carmen) Menzies and their daughters Codi-Lynn, Kyra and Kendall, Kelli Menzies, Joel (Loni) Houseman and their daughter James, Josh Houseman and his daughter Maya (Karen and her son Kade), Jared (Danie) Houseman and their daughter Brynn, Justin Gane and his son Carson (Tasha and her son Hayden), Jaclyn (Jason) Westaff and their children Chase and Adalyn; as well as many nieces and nephews.  Hattie was the last of a generation on both sides of the family.

Hattie was amazing, loyal, independent, hard-working, strong
and the glue that held our family together.
Forever loved.
RIP Mom we will miss you forever and always.

The Funeral Service will be held on Saturday, June 25th, 2022 at 1:00 p.m. in Moose Jaw Funeral Home.  Heather MacKinnon will officiate and interment will take place in Central Butte Cemetery.  Those not able to attend are able to view the service virtually by going to www.moosejawfuneralhome.com/webcast/.  As an expression of sympathy, donations in Hattie’s name may be made to the Central Butte Seniors Centre, Box 509, Central Butte, SK S0H 0T0.  Arrangements are entrusted to Moose Jaw Funeral Home, 268 Mulberry Lane.  Gary McDowell, Funeral Director 306-693-4550