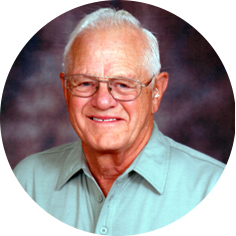 After a long and eventful journey through life Les Gabel passed away on August 24, 2020 at the age of 83.  He was predeceased by his great granddaughter Desirae Gabel, his parents and all siblings.  He is survived by Pat, his loving wife of 56 years and his three children, eldest Mark (Erin) and their three children  Brooke(Jordan) and their children Jace and Javen, Morgan(Brodie) and their son Zander and Cole(Cassidy), middle Kevin(Andy) and youngest Scott.  As well, he is survived by numerous cousins, nieces and nephews.  He was the first of his family to be born in a hospital, finish high school and move to the city.  He worked for SaskTel from the day he graduated from Peacock High School until his retirement 36 and a half years later.  He was heavily involved in the community through a variety of organizations and clubs that he either volunteered at, led or participated with.  His retirement years were spent spoiling his children, grandchildren and great grandchildren, traveling, cracking jokes and enjoying coffee with the men on coffee row.  Les will be fondly remembered for his kindness, honesty, dignity, a streak of stubbornness, laughter and love that knew no bounds – and organizational skills that were beyond description.  It needs to be noted that Les was an avid Moose Jaw Warriors fan from the day it was announced they were moving to Moose Jaw. He will be sorely missed by all who had the pleasure to meet him.  In keeping with Les’s wishes, a Private Family graveside will be held.  In lieu of flowers, the family asks you to make a memorial donation to STARS Air Ambulance 2640 Airport Road Regina, SK S4W 1A3. Arrangements are entrusted to Moose Jaw Funeral Home, 268 Mulberry Lane.  James Murdock, Funeral Director 306-693-4550.