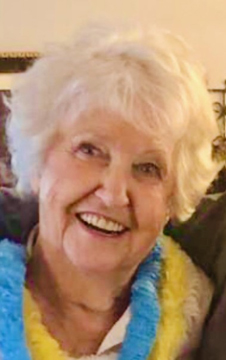 It is with heavy hearts that we announce the passing of our dear wife, mother and grandmother Helen ‘Elaine’ Frankow (nee Mack) on Sunday, August 21st, 2022.  Elaine passed away peacefully, surrounded by family, at the F.H. Wigmore Regional Hospital.

Elaine is survived by her husband of 60 years, Ed, and their three daughters: Kimberly (Barry), Rhonda (Lyle) and Dayna (Robert).  She was adored by her seven grandchildren: Meah (Cam), Mitch (Maddie), Deiter (Kaitlyn), Carly (Jon), Laine (Ekatarina), Leah and Tyler.  She is also survived by her three sisters: Marilyn, Caryn (John), and Norma (Doug); as well as brothers-in-law: Len (Loretta), Dave (Brenda) and Mike.  Elaine was predeceased by her parents, her daughter Lana, sister Margaret, sister-in-law Debra and brother-in-law Len.

Elaine was born in Winnipeg, Manitoba, in September of 1939 to Helen and Thomas Mack.  She grew up and attended school in Alonsa, Manitoba.  Upon graduation, Elaine moved to Winnipeg where she completed Manitoba Teacher’s College, which led to teaching positions in Kinosota, then Amaranth, Manitoba.  In 1962, she married her high school sweetheart, Ed.  Four daughters soon followed.

Ed’s career with the RCMP took them to Ottawa, Gravelbourg, North Battleford, Moose Jaw and Sturgis, respectively.  After Ed’s retirement in 1997, they moved back to Moose Jaw where she resided until her passing.  Although Elaine did not return to teaching, throughout the years she worked in a variety of capacities including banking, receptionist work and retail management.  Through her work experience, she became meticulous with record-keeping and organization which continued throughout her life.  Elaine was proud to support her community by becoming a board member for Diversified Services.

She was an avid curler in her younger years and always looked forward to watching yearly televised curling events.  Many summers were spent at Lake of the Prairies where she treated family and friends to her catch of the day.  Her fish fries were epic!

Elaine was blessed with a green thumb and always looked forward to gardening in early spring.  Baking and cooking were also talents in which she excelled and enjoyed.  Throughout the years she hosted many family functions where she went above and beyond spoiling everyone with their favourite dishes.  Meals were often followed by card games or other antics accompanied with lots of laughter.  She was always a good sport and could be persuaded by her daughters and grandchildren to try almost anything.

Elaine was a caring, humble woman who had the ability to appreciate and find beauty in the simple things.  She always recognized the positive in others and lived by the virtues of honesty, kindness and acceptance.  Although her passing has left a void in our family, we take comfort in knowing that her strength of character lives on in all of us.

“Although the song has ended, the melody remains.”

The family will be holding a Celebration of Life at a later date.  We would like to extend our heartfelt gratitude for the compassionate care she received from the staff at the F.H. Wigmore Hospital, notably Deb, Joe, and Kelly.  Arrangements are entrusted to Moose Jaw Funeral Home, 268 Mulberry Lane.