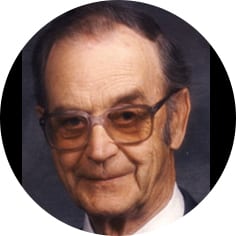 Robert Thomas Francis of Moose Jaw and formerly of Tilney, Saskatchewan, went home to be with his Lord and Saviour on Thursday, December 4th, 2008. The Funeral Service will be held on Thursday, December 11th, 2008 at 11:00 a.m. in Hillcrest Apostolic Church with Pastor Allan Buchanan officiating. Robert was predeceased by his wife Dorothy, parents Lawrence and Florence Francis, step mother Effie, and brothers Gordon, Donald and Calvin Francis. He will be lovingly remembered by his children Carol Gregor (Gary), Ron Francis (Linda), Sharon Francis Aichelle (Dale); brother Ormond Francis (Helen); sister Elaine Noble; step sister Mildred Zalesky; 9 grandchildren; 14 great grandchildren; and numerous other relatives. Robert was born in Moose Jaw on March 8th, 1918 and grew up on the family farm in the Tilney district.  He married Dorothy Forge on June 28, 1941 and together they farmed in this district until they moved to Moose Jaw in 1999.  He served in the RCAF as a wireless electrical mechanic and wireless operator during World War II.  Robert loved hunting at his cabin in the bush, and fishing in many lakes throughout the province.  He was an active volunteer worker at Kedleston Camp for many years, and an active member of the Hillcrest Apostolic Church.  He was especially interested in young people, and introduced many of them to the joys of outdoor activities. Robert lived the last few years at his home, supported by many wonderful caregivers in Homecare. The family wishes to extend special thanks to the Food Services staff at Providence Place for their interest and support during Dad’s daily lunch time visits, and the Extendicare staff for their compassionate, professional care until his peaceful passing. Flowers are gratefully declined. As an expression of sympathy contributions in Robert’s name may be made to the Hillcrest Memorial Fund, Hillcrest Apostolic Church, 1550 Main St. North, Moose Jaw, Sask. S6J 1L3 or to Joe’s Place, 402 Main St. North, Moose Jaw, Sask. S6H 3K2.