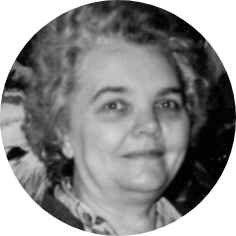 It is with great sadness that we announce the peaceful passing of our aunt Nellie in the early morning of Friday, July 13th, 2018 at age 89 years.  The last of four siblings, she was predeceased by her sister, Elizabeth Adaline; and brothers, Donald John and Kenneth Sinclair.  Nellie May (or Mae, as she preferred it spelled – “May” being a month and not a proper name) was born on the family farm just south of Rockland, SK.  Shortly after her father’s untimely death in the 30’s, the young family moved to Indian Head, SK and there she spent most of her childhood years. After studying for 3 years at the Emmanuel Bible School in Newcastle Bridge, NB, where she graduated with honours in 1953, she returned to Saskatchewan, now to Moose Jaw.  Nellie and her sister Beth shared a house together there until Beth’s passing in 2014, when Nellie moved first to Capilano Court, thence to Extendicare, where she was looked after with wonderful care and sensitivity. Nellie was an ardent devotee of the evangelist, Billy Graham, but also generously supported numerous missionary causes around the world.  She was a prodigious writer and kept reams of notebooks filled with her trademark, block-letter printing. Nellie had an exceptional memory and could recall the words to a myriad of psalms, hymns, even poems that she found meaningful: “Be quick to hear but be slow to speak”, she would recount. She was also a keen student of the French language. A kind, gentle and generous soul, Nellie will be missed by all those who knew her!  A Graveside Service will be held on Friday, August 3rd, 2018 at 3:00 p.m. in Rosedale Cemetery in Moose Jaw, SK.