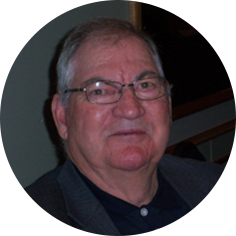 It is with great sadness that the family of John Fischer announces his passing at the age of 84 years in the early hours of March 20th, 2017, at the Dr. F.H. Wigmore Regional Hospital.  John was born in Macklin, SK on July 31st, 1932 to Frank and Helen Fischer.  He was the 7th of 18 children.  He grew up in the small town of Denzil, SK but left home when only a teen.  John worked for the CPR as a carman in Moose Jaw for 40 years.  Throughout his life he worked side jobs including: welder, carpenter, cook, handyman and Santa Claus.  John met his wife Katherine on a train.  They married in June of 1953 and raised three daughters in the house that they built on Coteau Street.  John loved to garden, fish, hunt, play cards and watch sports.  When he was younger, he skipped a curling team and coached baseball.  He was an active parishioner at the Church of Our Lady and a member of the Knights of Columbus.  He also belonged to the New Democratic Party and the Moose Jaw Horticultural Society.  He was a very social person who would talk to anyone, everywhere, all the time.  John’s family will forever treasure his memory.  He was predeceased by an infant son, Randy; his son-in-law, Paul Toupin; his parents, his in-laws and 8 of his siblings.  John is survived by his wife of 63 years, Katherine; and his three daughters: Joan (Kelly) Popoff, Julie (Alan) Thiessen, and Denise Toupin; his eight grandchildren: Orin (Sara), Chloe (Greg), Rory (Ashley), Tashia, Joel, Anita (Codey), Mitch (Alex) and Kaitlin; his 6 great-grandchildren; 9 of his siblings; and numerous nieces and nephews.  The Funeral Mass will be celebrated on Saturday, March 25th, 2017 at 11:00 a.m. in Church of Our Lady, 566 Vaughan St, Moose Jaw, SK.  Father Jake Ibay will be the presiding celebrant and interment will take place at Rosedale Cemetery.  A Prayer Service will be held on Friday, March 24th, 2017 at 7:30 p.m. in Moose Jaw Funeral Home.  Flowers are gratefully declined. As an expression of sympathy, donations in John’s name may be made to the Saskatchewan Lung Association, Box 58000, Saskatoon, SK S7K 7Y4 or to the Church of Our Lady Building Fund, 566 Vaughan St, Moose Jaw, SK S6H 6L3.  Thank you to the wonderful caregivers at West Park Crossing, Providence Place GARU and Maguire Centre, and the Dr. F.H. Wigmore Regional Hospital.  Arrangements are entrusted to Moose Jaw Funeral Home, 268 Mulberry Lane.  Todd Sjoberg, Funeral Director 306-693-4550