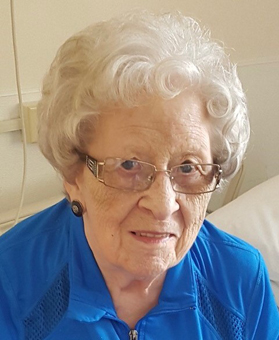 With heavy hearts, we announce that Lorraine Ewen passed away on Tuesday, July 6th, 2021, two days before her 93rd birthday.

Lorraine was born on July 8th, 1928 near Findlater, Saskatchewan in her family home.  She was born to William and Grace Campbell (née: Best) and joined her three brothers: Gordon, Grant and Bill.  She attended Westridge School and then went to Balfour Tech in Regina, SK in 1945 to take secretarial training.  After graduating, Lorraine and a friend she met at school decided to get on a plane (which was very rare in those days) and fly to Victoria, BC and start their working lives.  In Victoria, Lorraine met a dashing young man from Saskatchewan, Don Ewen.  Lorraine and Don moved back to Saskatchewan and they married on June 6th, 1953 in Moose Jaw.  They started their family with Glenda born in 1954 and Eileen in 1956.  They worked on a few different farms until they bought a farm at Baildon, Saskatchewan just south of Moose Jaw in 1961 and the family moved to Baildon in 1964.  They lived at Baildon for many years, then on an acreage near the Air Base, and finally to the Manhatten Condo in Moose Jaw.  Lorraine lost Don in 2015 after 62 years of marriage and she then lived at Caleb and finally West Park Crossing.