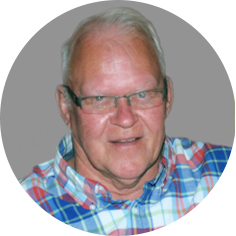 It is with great sadness, but gratitude for a life well lived to announce the passing of Edward (Ed) Erickson on Sunday, January 10th, 2021.  Ed was born in 1938 in Wadena, SK, the youngest of 6 siblings.  The family was raised on a farm in the Hendon area where he went to school until moving to Regina and started working with CN Rail.

Barb and Ed raised their family in Moose Jaw, spending weekends/summers at the cabin in Sandpoint (Buffalo Pound Lake).  Their doors were always open to anyone that needed somewhere warm, comfortable and loving.  They acted as 2nd parents to many.

After retiring from transit in 1999, Barb and Ed moved to the lake full-time, where Ed sat on council of the RM of Marquis and the Hamlet of Sandpoint for many years.  Barb and Ed hosted numerous corn boils, pig roasts, dances and pancake breakfasts.  They moved back to town (Moose Jaw) in 2010.

He was predeceased by his parents, many siblings and friends.  Ed is survived by his wife, Barb; sons, Terry (Coleen) and Brian (Cal); sister, Edna (92); 5 grandchildren and 5 great-grandchildren; along with several nieces and nephews.  A Private Family Service will be held to honour Ed.  As an expression of sympathy, donations in Ed’s name may be made to The Moose Jaw Humane Society, Box 1658 Station Main, Moose Jaw, SK S6H 7K7.  Arrangements are entrusted to Moose Jaw Funeral Home, 268 Mulberry Lane.  Todd Sjoberg, Funeral Director 306-693-4550