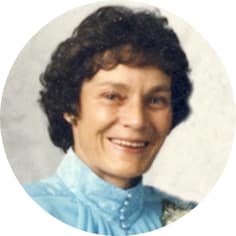 Mrs. Joan Lillian Duffey, aged 70 years of Moose Jaw, passed away on Thursday, January 10th, 2008.  A Celebration of Joan’s life will be held on Monday, January 14th, 2008 at 2:00 p.m. in Moose Jaw Funeral Home.  Pastor Bill Thomson will officiate with interment to follow at Rosedale Cemetery.  Joan was born at Briercrest, SK., on July 9th, 1937.  She married Cam Duffey in 1959 and together they spent 30 years on their farm at Caron until moving to Moose Jaw in 1989.  Joan enjoyed watching her grandchildren participate in various sports and other activities.   Predeceased by her parents Bill and Myrtle McGhee.  Joan will be lovingly remembered by her husband Cam; daughter Sandra (Roger) Blyth; son Kelly (Marcy); grandchildren: Kevin and Carla Blyth and Tyson, Rhyann and Calder Duffey; brother Jim (Melva) McGhee as well as numerous aunts and other family members.  In memory of Joan, memorials to the Saskatchewan Lung Association, Box 58000 Saskatoon, SK S7K 7Y4 or a charity of choice would be appreciated by the family.