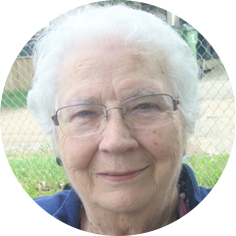 On August 7th, 2019, in Moose Jaw, Saskatchewan, M. E. Merle Dryburgh (Ankerman née: Seal) passed away at age 93, peacefully at Providence Place, surrounded by her family.  Merle was born on the farm near Assiniboia, SK on August 1st, 1926.  She married Dale Ankerman on December 23rd, 1948.  They had four children together and resided in Moose Jaw for most of their lives.  Dale passed away at the young age of 44, leaving her with the children to raise. She had an 18 year career working for Sask Power and retired at age 65.  In her later life, Merle was blessed to find the second love of her life, Jim Dryburgh. Though their marriage was short, it was a beautiful season in her life.  Merle loved the animals on the farm, was an excellent cook, a world traveller and enjoyed the outdoors and camping. Over the last few months, Merle spent many hours colouring pictures in a scripture based colouring book, as well as in a Bible colouring book.  She spent several winters in Arizona with her sisters. Merle was a “Jane of all trades”, developing much resilience throughout her life and was able to do almost anything she put her mind to. She was even able to stay in her own home until she was 89 years old.  Merle was always supportive in prayer, encouragement, and kindness, and was incredibly loyal to those she loved. Her family was a very important part of her life. Merle leaves behind a deeply rooted legacy of faith in Jesus. She could often be found sharing the story of how Dale and her answered an alter call and accepted Jesus together.  She loved the Lord with all of her heart and was bold about sharing how God changed her life for the better. She spent many hours in her later years underlining her favourite scriptures in Bibles and sending them to those she loved. Merle invested financially to several missionaries and ministries around the world, and believed in freely sharing the blessings that God gave her.  The family would like to thank the staff at Providence Place for the amazing love and care given to Merle during the last year. She was predeceased by her parents, Jennie and William Seal; brother, Elgin (June); sisters: Velma (Orval), Marjorie (Leroy), and Doris; sister-in-law, Anne (Bud); husbands; Dale and Jim; son, Ken; and son-in-law, Doug. Merle is survived by her brother-in-law, Don; daughters: Beryl (Brad), Phyllis, and Myra (Duncan); grandchildren: Lana, Sharla (Rod), Clint (Sherry), Carley (Micah), Rhonda (Mike), Kevin, Kyle, and Emily; and great-grandchildren: Victoria, Spencer, Noah, Zachary, Warren, Malakai, Liam, Isabella, Caleb, Jenna, Kyla, Isaac, Andrew, Samuel, and Vienna.  The Funeral Service will be held on Monday, August 12th, 2019 at 10:30 a.m. in Victory Church, 637 Main St N, Moose Jaw, SK.  Pastor Barry Drinkel will officiate and interment will take place at Sunset Cemetery.  A Time of Visitation for Family and Friends will be held on Sunday, August 11th, 2019 from 7:00 to 8:00 p.m. at Moose Jaw Funeral Home.  As an expression of sympathy, donations in Merle’s memory may be made to the Victory Church “Isaiah 58” Mission Project or The Gideons.  Arrangements are entrusted to Moose Jaw Funeral Home, 268 Mulberry Lane. Gary McDowell, Funeral Director 306-693-4550.