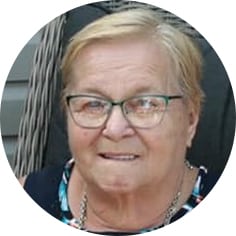 It is with extreme sadness that we announce the passing of Sharon Ann DeBruyne (née: Diebel) on Monday, October 14th, 2019.  Sharon was born in Kincaid, SK on December 28th, 1945 to Harry and Edna Diebel.  The oldest of 4 children, she attended school in Meyronne and Kincaid, SK.  Sharon met George DeBruyne at a school dance. They were later married and raised 7 children: Donna (Blake) Wiggins of Regina Beach, SK, Bonnie DeBruyne (Patrick Kennedy) of Swift Current, SK, Mark DeBruyne (Shari Walford) of Parksville, BC, Tina (Bob) Fallon of Regina, SK, Greg (Randi) DeBruyne of McCord, SK, Patti (Kevin) Werschner of Rosthern, SK, and Holly DeBruyne (Darcy Beattie) of Lethbridge, AB.  Sharon is also survived by her sister, Marlene Webb of Medicine Hat, AB; brother, Wayne (Hazel) Diebel of Meyronne, SK; 16 grandchildren and 5 great-grandchildren.  She was predeceased by her parents, Harry (Bud) and Edna Diebel; brother, Ken (Karen) Diebel; husband, George DeBruyne; and common-law spouse, Norm McCallum. Sharon taught ceramics for many years in her basement studio while on the farm north of Mankota, SK.  Her family and friends were always her taste testers for her many wonderful baking and cooking creations. She took pride in her yard and it was full of flowers and shrubs. She had a green thumb, which she did not pass on to everyone. Through Sharon’s kind, loving and forgiving heart, she taught her children these important values.  She also instilled values of being determined and competitive. This always appeared through her love of games such as cribbage, which in her final year residing at The Meadows in Swift Current, was enjoyed by many an unsuspecting competitor. Sharon will always be remembered for her open and welcoming heart, and open arms for those treasured hugs.  A Celebration of Sharon’s Life will be held on Sunday, November 10th, 2019 at 2:00 p.m. in the Mankota Agricultural Hall, Mankota, SK. In lieu of flowers, donations in Sharon’s name may be made to theDialysis Unit at the Cypress Regional Hospital c/o the Noble Irwin Health Foundation, 429 4th Ave NE, Swift Current, SK S9H 2J9. Arrangements are entrusted to Moose Jaw Funeral Home, 268 Mulberry Lane.  Andrew Pratt Funeral Director 306-693-4550.