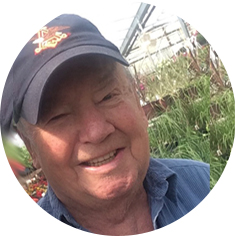 Ernest Raymond Cossette was born April 4th, 1938, the eldest child to Leo and Yvonne Cossette of Coderre.  Ernie, or Mousse as he was affectionately known as, passed away Thursday, December 24th, 2020 surrounded in his families’ love after a courageous battle with Alzheimer’s and cancer.  July 8th, 1959 Ernie was playing the game he loved, baseball, in Courval where he met the love of his life, Barbara Johnson of Parkbeg.  On July 16th, 1960 Ernie and Barb were married.  The first few years of married life found Ernie and Barb between Coderre, Moose Jaw and Regina.  It was Regina where they settled and raised their family.  Ernie had a career of over 30 years as a building maintenance engineer in some of the larger buildings in downtown Regina.  After living in Regina for over 30 years, they retired to Mortlach, then Moose Jaw and finally Unity.  Ernie loved the Montreal Canadiens, travelling, camping, and coin collecting.  Ernie was a happy go lucky guy who loved to make you smile.  He most enjoyed spending time with children and animals.  He was predeceased by his parents, Leo and Yvonne; infant brother; parents-in-law, Edwin and Mary Johnson; brothers-in-law, Andy Endresz, Edwin Johnson, Charles Johnson, Allan Downton, and Roger Gaucher; and sister-in-law, Agnes Endresz.  Ernie is survived by his loving wife of 60 years, Barbara; son, Ronald (Lisa) and his 6 children; daughter, Michelle (Jason); grandson, Bryce (Reena); granddaughter Kelsey (Joey); granddaughter, Kimberley (Vern) and her mother and siblings; sisters, Jeannie Gaucher and Lucille Downton; as well as other extended family.  A Celebration of Ernest’s life will be held at a future date when we can all be together.  In lieu of flowers, donations may be made to: Unity & District Long Term Care, PO Box 741, Unity, SK S0K 4L0, Attn: Brianna Heck Activities Department Donation.  Arrangements are entrusted to Moose Jaw Funeral Home, 268 Mulberry Lane.  James Murdock, Funeral Director 306-693-4550