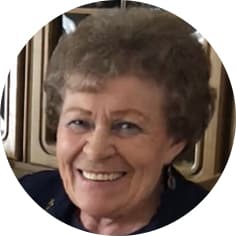 Arlie Chambers passed away peacefully on Wednesday, March 4th, 2020 with her family by her side.  Arlie was born by home delivery at a farm south of Mankota, SK on October 15th, 1935 to Joker and Agnes Kohl.  She was the second oldest child in a family of 5 – Glen, Nedra, Fernie and Garry.  Arlie attended Wideview Country School south of Mankota, and Tech High School in Moose Jaw, SK.  In Moose Jaw she met and married Doug Chambers in 1955. They had 2 daughters, Laurie and Nola. Arlie had many jobs during her life including physiotherapy assistant, bar waitress, Avon consultant, Mary Kay consultant, and restaurateur in a variety of settings including stand-alone restaurants and park booths.  She ended her career as owner/operator of Rancher’s Nook restaurant in her home town of Mankota. Her number one priority was always ensuring her kids had all they needed growing up and getting their education. Arlie has had many special people in her life, and she loved life to the fullest! She was predeceased by her Mom and Dad, daughter Nola, sister Nedra, and brother Glen.  Arlie is survived by her daughter, Laurie; grandchildren: Blaine, Brett (Kelly), and Tracy (Craig); sister, Fernie; brother, Garry; and special friend, Bob.  Arlie’s family would like to thank all of her friends, family and the staff of Mulberry, Chez Nous and Extendicare, that have supported and cared for Arlie during these last couple years!  A Celebration of Arlie’s Life will be held on Friday, March 13th, 2020 at 1:00 p.m. in Moose Jaw Funeral Home with Pastor Walter Engel officiating.  As an expression of sympathy, donations in Arlie’s name may be made to the Kinsmen Telemiracle Foundation, 2217C Hanselman Court, Saskatoon, SK S7L 6A8 or the Moose Jaw Health Foundation, 55 Diefenbaker Drive, Moose Jaw, SK S6J 0C2.  Arrangements are entrusted to Moose Jaw Funeral Home, 268 Mulberry Lane. Andrew Pratt Funeral Director 306-693-4550