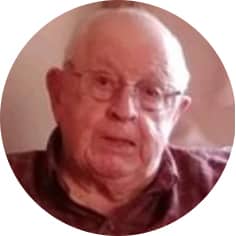 It is with great sadness to announce that Stanley Cave passed away at the age of 92 years on Monday, June 17th, 2019 at Chez Nous Care Home in Moose Jaw, SK.  Stan was born to Sam and Kate Cave on January 11th, 1927 on the family farm.  He was one of six children. As a child being born into the life of a farming family, it was easy to see why he would continue to follow in the family footsteps.  He always asked about seeding and the cattle and how calving went, farming came first. He rented the family farm from his mother and in later years, purchased all that land including the family homestead, for which he was recognized by the Government of Canada, the Provincial Government, and the local Rural Municipality with a framed certificate for keeping the homestead in the family name.  It has now been in the family for 102 years. Stan met and fell in love with Sylvia Kiss and they were married in April 1953. They purchased the Prebble farm site and here they raised 3 boys. This site is a 3 generation family run farm. Stan ran what is called a mixed farming operation, having grain and cattle. He had a passion for the land from sunup to sundown, farming was his life. In later years, due to the harsh winters, he moved his family into Tugaske,, SK for the winter months and then back out in the spring to start the growing season all over.  They later bought a house in Tugaske and moved in permanently, still going to the farm every day, come rain, snow or sunshine. Stan also had a passion for music which he inherited from his mother, who was the first person to play the piano for silent films in England. He played numerous instruments, but the guitar, banjo and mandolin were his favorites. He would play with anyone who would jam with him. Weeks prior to his passing, he was playing his mandolin at the care home with Kelly Sapergia, who came to entertain the residents. Thank you Kelly for letting Stan jam with you.  It made his day. He was predeceased by his wife of 65 years, Sylvia; son, Wayne; his brothers and their spouses, Donald (Judy) and Leonard (Flossie); his sisters and their spouses, Betty (John) and Daphne (Henry); and brother-in-law, Delwin (Shorty) Nicholson. Stan is survived by his son, Bruce (Dianne) along with their family: Corwin, Nadine, Cassidi, Ashton and Shae-Lyne, and Neil, Gratia, Logan and Nyla. son Clayton (Sarah): Jodey (Tammy), Gwen, Clint (Wanda) and Oren; sister, Mavis Nicholson; as well as numerous nieces and nephews.  The family would like to thank Dr. Marx for the great care she had given both Stan and Sylvia over the years, and also to the great staff at Chez Nous for their compassion and care for Stan and Sylvia.  Stan felt at home there. The Funeral Service will be held on Tuesday, June 25th, 2019 at 2:00 p.m. in the Tugaske Community Centre in Tugaske, SK with Pastyor Sharon Shultz officiating.  Interment for both Stan and Sylvia will take place following the service at Tugaske Cemetery.  As an expression of sympathy, donations in Stan’s name may be made to STARS Air Ambulance, 2640 Airport Road, Regina, SK S4W 1A3 or the Alzheimer Association of Saskatchewan, 301 – 2550–12th Ave, Regina, SK S4P 3X1.  Arrangements are entrusted to Moose Jaw Funeral Home, 268 Mulberry Lane. James Murdock, Funeral Director 306-693-4550.