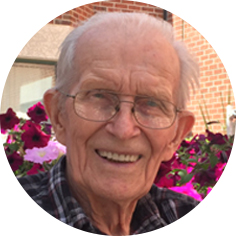 William (Bill) Calanchie, aged 97 years of Moose Jaw, SK passed away on Friday, November 10th, 2017.  Bill was born at Calder, SK where he received his education and worked on the family farm.  He joined the Royal Canadian Army and served overseas in England, France and The Netherlands.  He meet Jocelyn Stoner and they married in 1948 in England, then returned to Canada in 1950 where together they raised two daughters.  Bill was manager at Beaver Lumber in 5 different locations in Saskatchewan.  He then went on to work in the office at Sash and Door and retired from there after 22 years.  Anyone who met Bill for a short time came to know him as a kind, gentle, caring man.  He was adored by his grandchildren and great-grandchildren.  He was predeceased by his wife, Joyce; brothers: John, George, Peter, Nick, Harry, Kost, Mike, Eli, and Alex.  Bill will be lovingly remembered and sadly missed by his daughters, Bev and Debbie (Tony); grandchildren: Angela (Trevor) Gordon and their children Jackson and Aspen, Cindy (Marco) Ricci and their children Maia and Renzo, Jeff (Ashlea) Street and their children Chace, Deklan, and Cole; brother, Jim (Irene); close sister-in-law, Laura Facchin; Bob (Jackie) Street; as well as numerous nieces and nephews.  The family would like to thank the staff of St Vincent Providence Place for making Bill’s stay a happy time.  In keeping with Bill’s wishes, a private family service will be held at a later date.  In lieu of flowers, donations in Bill’s name may be made to The Moose Jaw Humane Society, Box 1658 Station Main, Moose Jaw, SK S6H 7K7.  Arrangements are entrusted to Moose Jaw Funeral Home, 268 Mulberry Lane.  Todd Sjoberg, Funeral Director 306-693-4550