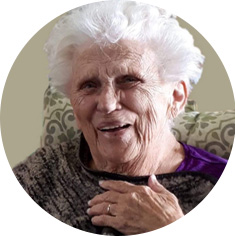 It is with deep sadness that we announce the passing of our mother, Stella Gertrude Bruvold.  Stella was born February 19th, 1924 in Brownlee, SK and passed away peacefully on May 14th, 2020 in Central Butte, SK.  Stella was raised in the Darmody area.  Growing up thru the 1930’s was not easy and she had many stories about her, her siblings and friends getting into mischief during this time.  Stella had a love of dance.  If there was a dance within 50 miles she would be there, often walking many miles in the dark and cold to attend.  She married Oliver Bruvold on November 22nd, 1941.  She was best known for her quick wit and retort.  Stella loved to laugh and dance, and was always up for a large gathering.  She was an excellent cook and always said that was the way she showed people she loved them.  Large family suppers on special occasions were mandatory.  She would think nothing of cooking up pure heaven for a sitting of 30 people without ever breaking a sweat.  She was in her element and had a deep love of family.

Stella had many jobs throughout her life, one of them being a cashier at Safeway for several years.  When she realized that being a cashier was a young person’s job, she went back to school and took her hairdressing course.  Stella and Oliver lived most of their married life in Moose Jaw, SK but when she finished her hairdressing course, they moved out to the Tugaske/Central Butte area.  She wasn’t content with just one shop in Tugaske so she also opened a shop in Central Butte as well.  When the driving back and forth got to be too much, they moved to Central Butte where they lived until Oliver passed away in 1987.  After his passing, Stella moved back to Moose Jaw to be closer to family.  She always admired her mother’s crocheting, and after retirement decided to pick up the hobby herself and made many beautiful doilies for family and friends.