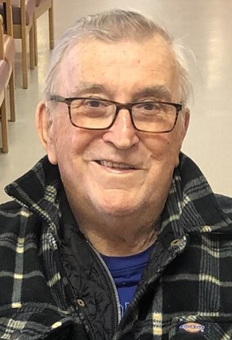 It is with deep sadness we announce the passing of our husband, father, father-in-law, and grandpa, Dennis Blair on Tuesday, June 1st, 2021.  Dennis was born in Indian Head, SK on April 29th, 1938, son of Hector and Kathleen Blair.  He grew up in Indian Head, meeting the “love of his life” there, a new young teacher that had come to town.  Dennis and Alma (née: Peel) were married in a small country church, Knox United in Grayburn, SK on August 27th, 1960, and they made Moose Jaw, SK their home.

Dennis worked in various occupations, Red Seal Interprovincial Mechanic, Autobody, and his last profession was as a Journeyman Boilermaker Local 555.  This profession took him on many journeys across Canada.

Dennis had two loves, his first being his family.  He called daily to his daughters and grandchildren, always with an “I love you”.  He was also the biggest fan of anything his girls or grandchildren were involved in.  His second love was his dogs, or anyone else’s dog.  They were sure to be loved up by him.

Dennis found enjoyment in life restoring old cars, and the driveway was never big enough!  He passed his love of them to his girls, making sure they both had one.  Riding his 1979 Harley Electra Glide beside his “Girlfriend” on her bike gave him great joy through many mountain passes they travelled together.

After a work injury in 1987, Dennis’ life changed.  He found he had a gift he never knew he had.  The talent of carving songbirds and decoys, winning many awards.  Every Christmas his girls and grandchildren were given a different carved Santa of some kind.  He enjoyed seeing our faces as we saw them for the first time.

Our family would like to thank Dr. Ramadan and Dr. Rodwin for the wonderful care and compassion towards Dennis.  As well as to the nursing staff and students on the Medicine Ward at the Dr. F.H. Wigmore Regional Hospital.  Their care and compassion during his last days will never be forgotten.  We would like to thank the care staff at Providence Place Unit – 1 Edgar Hall, and Central Butte Regional Manor Nursing Home for his last 6 months of care.  Dennis also enjoyed going to McGuire Center, where he loved the staff and friendships he made.  Thank you to everyone who touched his life.  We are forever grateful.