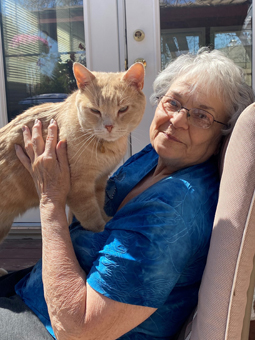 Elizabeth Kathrine Black (née: Klepsch), aged 74 years of Moose Jaw, SK passed away peacefully on Sunday, February 13th, 2022 at the Wascana Rehab Center in Regina, SK.  Liz was born on October 22nd, 1947 in Kincaid, SK.  Liz was predeceased by her father, Anton; mother, Kathrine; and siblings: Hank, Reg (Dot), and Trudy (Bernie).  Left to mourn her loss are her husband, Jim; daughter, Penny (Shaun); grandsons, Grayson and Conor; brother, Kurt (Carol); sister-in-law, Bridget; as well as many nieces and nephews.  Liz moved to Moose Jaw with her Mother and siblings at the age of 5 after her father’s death.  She graduated from Peacock High School and immediately began a 37 year career with the federal government, including running the local Custom Office for many years, then a period at Canada/US border as an agent, and finally retiring from CRA in Regina, SK in 2002.  Jim and Liz drove stock cars for many years and she loved racing in the Powder Puff races.  They also enjoyed their lake front cabin at Sun Valley.  In later years, Liz and Jim enjoyed cribbage games every Tuesday at the local Legion where she also volunteered on many committees.  A Private Family Graveside Service will be held at a later date.  In lieu of flowers, donations in Liz’ name may be made to The Moose Jaw Humane Society, Box 1658 Station Main, Moose Jaw, SK S6H 7K7 where they adopted her beloved cat Bob.  Arrangements are entrusted to Moose Jaw Funeral Home, 268 Mulberry Lane.  James Murdock, Funeral Director 306-693-4550