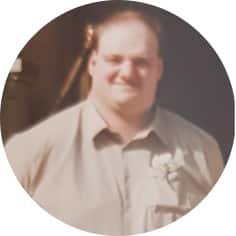 It is with deep sadness that we announce the passing of Matthew James Betts (otherwise known as Tiny), aged 50 years of Tugaske, SK on Friday, July 19th, 2019.  He passed away peacefully at the Dr. F.H. Wigmore Regional Hospital in Moose Jaw after much suffering.  Matthew was born in Kettering, Northamptonshire England to Paul and Joyce Betts on March 8th, 1969.  He attended school until the age of 16.  He then commenced work in a local garage as a trainee motor mechanic and later obtained an HGV Class 1 driving licence, enabling him to work as a truck driver.  Matthew worked for several years truck driving in the UK and across Europe, until he decided that he would like to travel in Canada. In 2005, he immigrated to Canada where he commenced work with HWT in Saskatoon, travelling across Canada and into the USA.  After a number of years he began working for Don Cannon in Tugaske and continued his travels in a truck across Canada and again through the USA. Several years ago he became unwell and was unable to continue driving. After much suffering he was admitted to hospital and four weeks later he lost the fight against cancer.  Matthew is survived by his mother and father and two sisters and their families. We have received many condolences from friends in the USA, across Canada and in Europe. He will be greatly missed by all. The Funeral Service will be held on Sunday, July 28th, 2019 at 1:30 p.m. in Moose Jaw Funeral Home with Celebrant Dave Foley officiating.  Flowers are gratefully declined.  As an expression of sympathy, donations in Matthew’s name may be made to the Moose Jaw Health Foundation, 55 Diefenbaker Drive, Moose Jaw, SK S6J 0C2.  We would be pleased for this to go towards the purchase of medical equipment or for patient care. Matthew received the highest care from the dedicated staff at the hospital and we give them our grateful thanks.  Arrangements are entrusted to Moose Jaw Funeral Home, 268 Mulberry Lane. Gary McDowell, Funeral Director 306-693-4550.